Alphamon is the final evolution of DORUmon, a Digimon ostracized for possessing the X-Antibody, and the leader of the Royal Knights who was believed to not actually exist. He evolves into Alphamon from the form of DORUguremon as Omegamon is about to strike him, and regains his memories of being a Royal Knight. Alphamon and Omegamon join forces to stop Yggdrasill from completing its plan to delete all Digimon, leaving Magnamon behind.

Alphamon and Omegamon fight Death-X-DORUgoramon, and Alphamon easily defeated it with Digitalize of Soul, before they reach Yggdrasill's chamber. They attempt to destroy Yggdrasill when it refuses to respond to their questions, but are stopped by a sudden attack from Death-X-mon and are overpowered by it, so Alphamon powers up further into Alphamon: Ouryuken.

Alphamon is depicted alongside the other members of the Royal Knights in the second opening, "Hirari", but does not appear within the episodes themselves.

Alphamon is a servant of Yggdrasill who hunts for Meicoomon.

Alphamon appears in one of the omakes.

Alphamon, whilst posing as Kuremi Kyōko in the Kuremi Detective Agency, was bored as she had too much free time, and complained about how it didn't matter if her job existed or not. Aiba Takumi got angry at it, saying that they should do their best to solve any potential problems, at any time and place. However, Kyoko only answered that they couldn't earn money without clients and decided to take a nap. Before she could, though, three clients arrived at the agency, and before they could enter, Kyoko sent Takumi to get them tea.

Now sitting down and with tea, the clients explained that their accounts had been stolen in a low floor of Cyberspace EDEN. Takumi realized that it was a case of account hacking, and explained that it was a Hacker act, and they dealt with those in the past. Learning that, the clients asked the detectives for their help, and Kyoko accepted, but gave Takumi alone the job. Takumi tried to complain about it, but Kyoko merely pointed out that it was his forte, and then lied saying she was very busy to take the work herself. Takumi accepted the job, but told Kyoko that she had to help him, which Kyoko was fine with. Furthermore, she pointed out that it was a suitable job for him since he wanted to beat up the thugs and, because it happened in a low floor, it could be connected to the mysteries about Takumi's body and he could find clues there, which Takumi had not thought about. With that said, Kyoko painfully slapped Takumi on his back, then Takumi performed a Connect Jump on the Kuremi Detective Agency's monitor.

After the Connect Jump, Takumi found himself in the low floor area, Coulomb. Kyoko contacted him, asking if there was anything suspicious. Looking all around, Takumi found a level 1 firewall. Kyoko asked him if he could handle it, which Takumi was confident he could. After breaking it and being shifted to another location, Takumi was unable to contact Kyoko anymore.

Back at the Kuremi Detective Agency, after Takumi defeated the Demons Hackers and recovered the stolen account data, Kyoko thanked Takumi on a job well done and told him the clients were happy they got their accounts back. However, they still didn't know anything about EDEN Syndrome, the ringleader, or the leader of the Demons. 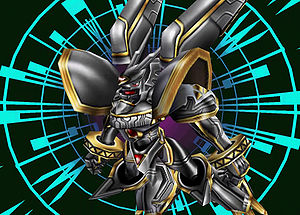 May evolve from DORUguremon by Card Evolution.

Alphamon is an obtainable Digimon, its Signature Weapon is the "Plasma Blade". Evolves from:

Alphamon appeared as a main antagonist, but in the very end, just wanted to prove that Digimon were strong enough to not have human Tamers. His theory contradicts itself as he starts getting tamers to work for him, so he really doesn't have a strong sense of his anti-tamer conviction. In the end, he tries to fight Chronomon with Clavis Angemon, eventually failing.

Alphamon is #368 Digimon, and is a Ultimate-level, Balance-class, Holy-species Digimon with a resistance to the Light element and weakness to the Dark element. Its basic stats are 323 HP, 360 MP, 186 Attack, 176 Defense, 156 Spirit, 143 Speed, and 85 Aptitude. It possesses the Heroic Power, Heroic Move, Death Ward, and Lucky Gods traits.

Alphamon evolves from Knightmon. In order to evolve into Alphamon, your Digimon must be at least level 65, with 50,000 Holy EXP, and you must have previously befriended a Clockmon.

Alphamon jogress from any two of DORUguremon, Holy Angemon, and Magnamon, if the base Digimon is at least level 61, with 45,000 Holy EXP, and 400 spirit.

Alphamon can be hatched from the Royal Digitama.

Alphamon can DigiXros from Grademon, DORUmon and Clockmon if Level 40 and above, 200 intelligence, 230 speed and if you Befriended a DORUmon.

Alphamon can only be obtained as a collectible card. Its card is part of the Royal Knights: Founder (ロイヤルナイツ：始祖 Roiyaru Naitsu: Shiso) set.

Alphamon appears in the Lament of the X-Antibody chapter (慟哭のＸ抗体編 Dōkoku no X-Kōtai-hen). It is also an obtainable Digimon which is evolved from DORUguremon. It can also be obtained as a collectible card. Its card is part of the Royal Knights: Founder (ロイヤルナイツ：始祖 Roiyaru Naitsu: Shiso) set and the X-Antibody of Destiny (運命のＸ抗体 Unmei no X Kōtai) set.

Kuremi Kyōko became possessed by Alphamon prior to the events of the game, after Kyōko contracted Eden Syndrome. It is one of the Royal Knights that sides with the humans, and fights along with you at various points in the game. Evolves from Cyberdramon or DORUguremon at level 60 with 150 ATK, 170 DEF, 135 INT, 40 ABI, and the case Great Challenge 7 (偉大なる挑戦⑦) cleared. It is also available as a Digimon Medal.

There are four versions of Alphamon. They evolve into each other.

Several changes have been made to the Japanese PS4/Vita/Switch and western Switch/PC versions, these being:

One of the DLC Digimon is Alphamon (NXEdge Style). In the Japanese PS4/Vita version, it could be obtained through pre-order. In the US and EU version of PS4/Vita, it could be purchased through the PS Store. In the Western Switch/PC and Japanese Switch versions, it is no longer DLC and can be obtained after talking to an NPC.

It does not evolve and cannot be degenerated.

Evolves from Cannonbeemon, Grademon, Hisyaryumon, or Metal Fantomon. Can evolve to Alphamon: Ouryuken by feeding it 3 or more Master Tag, 1 or more XX, and then battling and winning against an Ouryumon (2.0/3.0). Can also Blast Evolve into Omegamon (X-Antibody) or Alphamon: Ouryuken.

Alphamon is available as an opponent in the Coliseum.

Alphamon can be obtained by entering the password "ジカンヲモドスワザ○アルファインフォース○○○○".