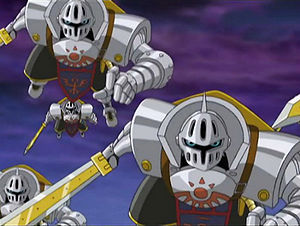 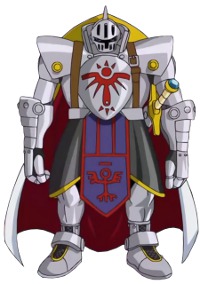 Knightmon in Digimon Xros Wars. Note the added cape, which differentiates him from a normal Knightmon.

Archnemon created a Knightmon from ten Dark Towers and set it to destroy a Holy Stone. When Oikawa Yukio opened several random Digital Gates, another Knightmon was set loose in Japan until Imperialdramon caught it and returned it to the Digital World.

A Knightmon guarded a house in which Akiyama Ryo, Makino Ruki, Shiota Hirokazu and Kitagawa Kenta stayed for the night.

Several Knightmon were under service of Dynasmon and Lord Knightmon of the Royal Knights during their assault on Seraphimon's Castle.

An army of Knightmon again served under Lord Knightmon of the Royal Knights during their assault on Earth.

Knightmon is a member of Xros Heart. He is a servant of Bastemon, the princess of Lake Zone, and commands a squadron of Pawn Chessmon.

A Tamer-owned Knightmon appears as part of the audience of the Battle Stage.[48]

Knightmon is a Land-type Perfect Variable Digimon that can be learned by the combination of Toy Agumon, Kokuwamon, and Hagurumon. Its Berserk Sword deals damage to 1 enemy Digimon.

Several Knightmon guard Amaterasu City as their duty, but they were reprogrammed by A.o.A and treats anyone who opposing them as the intruder. These Knightmon are invincible and cannot be defeated.

After Atsushi already defeated 4 Amaterasu Chiefs and obtained 4 ID Passes, Takumi, the S.A.P Agents and the Resistances will help him infiltrate the Amaterasu City by returning those Knightmon to the normal state. Later, he have to defeat a weakened Knightmon used by Royal Guard.

Knightmon can be obtained as a Perfect-level White Digimon card with 25 AP / 27 HP.

Knightmon can be found in the first area of Trans Field, or in evolved from Clockmon when level 40 with 200 Attack and 180 Defense. It can evolve to Alphamon when level 65 with 50000 Holy EXP and if Clockmon has previously been befriended.