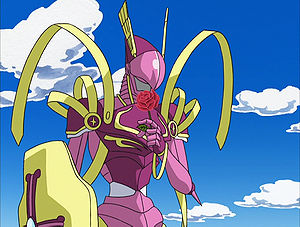 Lord Knightmon was one of the two Royal Knights serving Lucemon. He was only really helping Lucemon because he promised to give him and Dynasmon the key to the human world, where they would rule supreme. He commonly fought against Magna Garurumon in their struggles against the Chosen Children.

During their last battle against the Chosen Children, Lord Knightmon and Dynasmon were weakened because Lord Knightmon began doubting Lucemon. As a result they were defeated by Kaiser Greymon and Magna Garurumon, and their DigiCode was exposed. They cried out to Lucemon to help them, but he betrayed them, scanning them to evolve into Lucemon Falldown Mode.

Lord Knightmon participates in the conference with the other Royal Knights, and agrees with Omegamon's suggestion to press the offensive against the X Digimon. Lord Knightmon never actually appears on screen and instead has one line in the movie, with the movie's credits stating said line was spoken by Lord Knightmon.

Lord Knightmon was one of the Royal Knights serving under Yggdrasill.

Member of the ROG Organization. It is one of Barbamon's Shadow Guard, Last Heaven Elite along with Slash Angemon. They protect the gate to the Omega Area.

Lord Knightmon can only be obtained as a collectible card. Its card is part of the Royal Knights: Founder (ロイヤルナイツ：始祖 Roiyaru Naitsu: Shiso) set.

Lord Knightmon is one of the game's main antagonists. Under the guise of Kishibe Rie, she leads Kamishiro Enterprises by killing its CEO.. In the real world, she leads he faction that favors destroying the world, and uses her position to try to bring the rest of the royal knights so she can accomplish her goal. If she is defeated, the player can acquire a Lord Knightmon of their own.

Rie returns in Hacker's Memory, where she gains absolute control of Kamishiro by fabricating evidence that Kamishiro had illegally acquired Nile Corp, and using it as a pretext to fire most of the staff. She later revealed this deception to Mishima Ryuji. Kamishiro offers to fund the expensive service of siphoning off Mishima Erika's excess memories to EDEN, keeping her alive, but Rie uses the threat of pulling funding to keep Ryuji in line. Eventually Erika and Amasawa Keisuke discover this, which leads to them hacking into her server to find information on her. When Rie finds out about their infiltration, she decides they are loose ends and attacks them, as Lord Knightmon. Before Keisuke can deal the finishing blow, Lord Knightmon flees, only for her to freak out when there are police waiting for her, as Erika had tipped them off before arriving. Rie flees to the roof, only for Keisuke, Erika and the police to arrive on the roof. Erika and Rie get into a fistfight. Eventually, Rie throws herself off the roof, stating her time as Rie is done, with Matayoshi yelling for them to get an ambulance. Her body is never found, though Erika assumes she is still alive.