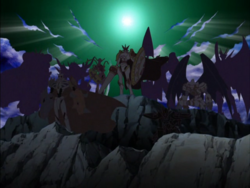 Picture of The Royal Knights in Digimon Savers

The portrayal of the Royal Knights in Digimon Savers is once again similar to that in Digital Monster X-Evolution, as being part of the Digital World Network Security and being subordinates of Yggdrasill. In the second opening sequence, nine out of the thirteen were shown as silhouettes or shadowed. All of the ones revealed in the opening eventually made an appearance in the series with the exception of Alphamon. Savers also embarked on the debut of the newly introduced Royal Knight, Duftmon.

Eight out of the nine current, at the time, Royal Knights appear in DS40, starting with Craniummon, who opposes the humans. Dukemon defends Craniummon when Shine Greymon Burst Evolves, and then the rest of the Knights arrive. The DATS team is defeated, but is then saved by Sleipmon, the Ultimate form of Captain Satsuma's partner, Kudamon. Dukemon and Sleipmon later disappear in a fight, Lord Knightmon is defeated by Mirage Gaogamon Burst Mode. Duftmon also made a debut in the series and was defeated by Ravemon Burst Mode and Rosemon Burst Mode. In the finale, Dukemon returns and Sleipmon devolves into Kudamon. Dukemon later joins Omegamon, Magnamon, Dynasmon, Ulforce V-dramon and Craniummon in helping the DATS team to save both worlds and stopping Yggdrasill.

Craniummon claims to be Yggdrasill's most loyal Knight. He encountered Suguru Daimon and Bantyo Leomon and was defeated by Bantyo Leomon Burst Mode. Later, he hears of Yggdrasill's plans to destroy the human world. He was the first Royal Knight to face the members of DATS in battle, and seemed to overpower them until Masaru Daimon blocked his spear with his fist and knocked Craniummon to the ground.

When Masaru gets closer to finding out the whereabouts of Yggdrasill, Craniummon then interferes and stops them. With his spear already equipped, his proceeds to summon his shield Avalon. Shine Greymon's attacks are impenetrable to Craniummon's shield; Masaru and Shine Greymon are continuously blown away, but Masaru in persistent, aside, Craniummon is secretly impressed by Masaru's positive attitude. Thoma and others are rushing towards Masaru. As Shine Greymon Burst Mode and Masaru lay powerless to stop Craniummon, he is just about to finish them off using his End Waltz attack until Mirage Gaogamon intercepts it using a Full Moon Blaster, and Thoma and the others arrive.

Thoma, Yoshino and Ikuto execute their DigiSoul Bursts, evolving their partners to their respective Burst Modes and go up against Craniummon. Masaru tells them to aim for his shield. They all attempt to distract Craniummon in order to do this. All Burst Modes attack the shield and Masaru delivers the final blow. Craniummon lays down the Claímoh Solais, and rises saying by breaking the shield he's so proud of his defeat and lets them pass before he changes his mind. When Craniummon appeared in the real world, Piyomon thought he was a threat and attempted to defeat him. Eventually, he soon realized that Craniummon was actually there to help Bantyo Leomon at Mt Fuji, who then reveals to them that Bantyo Leomon is Daimon Suguru. He then took the place of Bantyo Leomon, who had been holding the two worlds apart. Craniummon was later joined by the other remaining Knights, holding the Digital World all together while Masaru and his friends hold off Yggdrasill. After Yggdrasill's defeat, he says that Masaru is the new savior of the Digital World and he and the others return back.

Dukemon is the second Royal Knight to make his appearance towards Masaru and the others. He is the one that mentions to the group that "Suguru" was Yggdrasill and that it planned to destroy the real world to save the Digital World as they were on the verge of colliding with each other. In DS41, he entered the real world and began to destroy large urban areas, presumably within Yokohama. He battled against the DATS team, easily being able to defeat them. About to deliver the final blow, using his Final Elysian, Satsuma evolved Kudamon to Sleipmon and intercepted it and began to fight against him. Sleipmoin froze them both of them using Odin's Breath. The two Royal Knights survive, but are encased in ice, plummeting into watery depths. At the end of the series, he reappears and rejoins the other Knights at Mt. Fuji. He explains that Sleipmon's DigiSoul unfroze them. Dukemon helps Craniummon hold the Digital World up. After Yggdrasill has been defeated they head back to the Digital World.

Magnamon is one of the Royal Knights.

Dynasmon is one of the Royal Knights.

Ulforce V-dramon is one of the Royal Knights.

Omegamon is the leader of the Royal Knights.

Sleipmon is the partner of Satsuma Rentarou. Kudamon evolved into Sleipmon to save Daimon Masaru and his friends from the Royal Knights. However, during their escape, Dukemon hit Sleipmon with Final Elysian, injuring him. Back in the Human World, Dukemon returned to attack them, and not even Shine Greymon and the Geo Grey Sword could defeat him. Kudamon evolved into Sleipmon, protecting the group once again and attacking Dukemon with Odin's Breath, freezing both of them over. The resulting explosion cleared, with no sign of either Royal Knight. However, both of them survived and they remained encased in ice. He later reappears as Kudamon in DS47 after he saved both himself and Dukemon from the depths of the ocean by Sleipmon's DigiSoul breaking the ice at the cost of reverting to Kudamon again, and was taken to Mt. Fuji by Dukemon.

He appears in DS43. When he is introduced and stands before Yggdrasill, Craniummon mentions doesn't personally go out, and Yggdrasill was shocked that he of all the Royal Knights would take a course of action in destroying the Human World. Once he was in the Human World he begin destroying areas using his Aussterben attack, creating rifts in space-time in the process. As Rosemon and Ravemon attempt to stop his treacherous actions, they are clearly no match for him. Duftmon says saving the Digital World is justice and will do anything in order for that goal to be achieved. When Rosemon an Ravemon both Burst Evolve to Rosemon Burst Mode and Ravemon Burst Mode, Duftmon is shocked how they could achieve such a level, and Ravemon uses his Dotou Yami Kumo no Mai attack on him and Rosemon finishes him off using her Aguichant Lèvres attack, reverting him into a DigiTama.