Ulforce V-dramon makes his anime debut in "The Strongest Order of Knights - The Royal Knights Gather" with the rest of the Royal Knights. He prepares to kill the DATS team with Ulforce Saber, but Sleipmon saves them. He briefly appears in "The Burst Mode of Thoma's Determination", attacking the pyramids in Egypt. In "Shock! The Truth About Bancho Leomon", he utters his one and only line in the series, commenting on the light created from Yggdrasill's supposed destruction. In "Protect the Future! DATS' Final Battle", he helps the rest of the Royal Knights keep the Digital World and Real World from colliding after defying Yggdrasill.

In VITAL BRACELET Lab, an overlay with Ulforce V-dramon's data appears in the eponymous Vital Bracelet Lab, alongside many other data overlays, in front of Palmon and its Tamer. It hides the OPEN THE GATE? overlay that triggers Black War Greymon's Raid Boss Battle alongside a Koromon overlay. 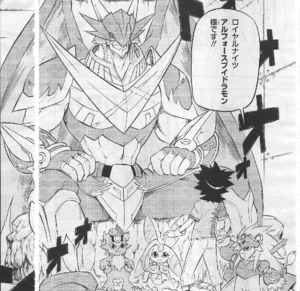 Zeromaru is Yagami Taichi's Partner Digimon. After he apparently killed himself overusing Dragon Impulse as Aero V-dramon against Arkadimon Super Ultimate in "The Super Ultimate Appears!", he reformed and evolved into Ulforce V-dramon thanks to gaining the Ulforce in "Holy Light, Ulforce".

Zeromaru appears in chapter 13 of the manga as a Royal Knight, in his Ulforce V-dramon form. He was blinded by Tactimon, but after spending time in Kudou Taiki's Xros Loader he recovered. His squires are Spadamon, Coronamon and Lunamon. They were trapped in the human world when the Digital World shattered into Zones, and were not able to return until accompanying Taiki. When they return, Ulforce V-dramon is reunited with the remaining Royal Knights and fights in the battle against Lilithmon's army.

Ulforce V-dramon can only be obtained as a collectible card. Its card is part of the Royal Knights: Founder (ロイヤルナイツ：始祖 Roiyaru Naitsu: Shiso) set.

Ulforce V-dramon is the partner of Shinomiya Rina. It is also an obtainable Digimon which is evolved from Aero V-dramon, and can evolve to Ulforce V-dramon (X-Antibody). It can also be obtained as a collectible card. Its card is part of the Royal Knights: Founder (ロイヤルナイツ：始祖 Roiyaru Naitsu: Shiso) set and the V-dramon Evolution (ブイドラモン進化 Buidoramon Shinka) set.

The Ulforce V-dramon native to the Cyber Sleuth dimension was killed while trying to cross the boundary between the real and digital world. You have to go and bring Shinomiya Rina and her partner V.V. to your dimension so you can have the speed to chase Sleipmon. Evolves from Aero V-dramon or Megadramon at level 60 with 120 ATK, 145 SPD, 40 ABI, and the case Rina Shinomiya's Challenge (四ノ宮リナの挑戦状) cleared. It is also available as a Digimon Medal.