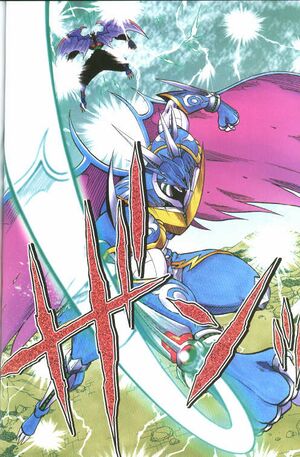 Zeromaru is the partner of Yagami Taichi. In order to defeat Demon Super Ultimate whose abilities have shut down Zeromaru's Ulforce ability, Taichi uses the Digimental to evolve Zeromaru to Super Ultimate.

Thanks to the synchronized power of courage between V-Tamer's Yagami Taichi and Adventure:'s Yagami Taichi, a massive Crest of Courage appeared in the sky, which evolved Zeromaru and Agumon into Ulforce V-dramon Future Mode and an incomplete War Greymon, respectively, allowing them to easily destroy the polyhedron.

Ulforce V-dramon Future Mode appeared only for a brief period in the Korean version of the game, evolving from Ulforce V-dramon using the Digimental Code-F. It was removed from the game in May 2018 due to copyright issues.[6]