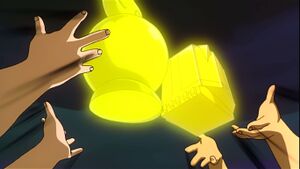 The Digimentals of Miracles and Fate being activated.

They allow Digimon that had less possibilities to grow and develop to perform an ancient type of evolution, known as Armor Evolution, that was used more commonly in ancient times in the place of normal evolution. That technology has been lost over time according to recent research. Digimentals tend to possesses elemental abilities that the Armor level Digimon contain.

In Digimon Adventure 02, their most common usage is that they work in an area under the influence of a Dark Tower which blocks most other kinds of evolution. Most of the digimentals represent one of the Crests possessed by the first Chosen Children. Interestingly, it was the Digimentals that gave rise to the Crests, but in some cases, such as Ken's Digimental of Kindness, the Crest gave rise to his Digimental.

The Digimon Kaiser's Dark Towers prevented the normal evolution of Digimon. Armor evolution by the use of the Digimentals bypassed the "blockade" and allowed the Chosen Children's digimon to evolve.

Saiba Rei was in possession of a Digimental which was taken by her brother Neo in order to evolve Arkadimon to Super Ultimate.

The digimentals would not have been able to be used if it was not for the events in Tag Tamers (sometime during the year 2000, immediately after Our War Game), where Ken and Ryo found the pieces and rebuilt them. The Four Holy Beasts then chose some of them to be used by the Chosen Children, and allowed them to be scattered throughout the Digital World. Although strangely, Ryo still had the Digimentals with him when he was blasted back into the past.

All Digimentals are given to the player by specific characters at specific moments of the game, regardless of which Partner Cards he's chosen, with the exception of Patamon and Tailmon's first Digimentals. These are:

The Adventure 02 Partner Digimon will reference their Digimentals when fought in their Armor Levels in various Battle Arenas for Wormmon, and in their respective Extra Arenas for the rest.