The smartphone Digivice resembles a conventional smartphone. The back of the chassis is colored white, and is partially covered by a grip case that is usually colored to match the Chosen Child's activated Digivice or D-3. There are two slightly different styles of case, one with a triangular pattern on which one Crest is printed, and one with a slightly different parallelogram pattern on which multiple Crests are printed. The triangular style is mostly associated with Yagami Taichi's original group of eight from Digimon Adventure and Ichijouji Ken, while the parallelogram style is associated with three of Motomiya Daisuke's group of four new Chosen Children from Digimon Adventure 02.[1]

Unlike original Digivices or D-3s, the smartphone Digivices do not change color when a partner Digimon undergoes evolution to the Perfect level or higher.

Smartphone Digivices have a user interface similar to a contemporary early-2010s smartphone, with a touchscreen, one large face button, and a side-mounted power button. When the phone is turned, off, a splash screen for Kōshirō's company, Izumi, is displayed.

Smartphone Digivices are said to have all the same functionality as the Digivices that they replace.[1] They also integrate the features of a conventional smartphone. Known features include:

When the countdown to the end of a Chosen Child's time with their Digimon begins, both original Digivices and smartphone Digivices project an identical, synchronized countdown ring.

Unlike other Digivices in other anime productions, not all of the individual smartphone Digivices have been seen on-screen in Kizuna or the accompanying Memorial Stories, and even for those that have, they are often out of focus or covered by their user's hand. Some of the information on their designs and colors is derived from secondary sources such as promotional art and crossover appearances in other media, although these sources do not always agree with each other (for example, multiple promotional and merchandise sources have depicted Takaishi Takeru's smartphone Digivice as having an entirely different color from Kizuna).

In "To Sora", Takenouchi Sora has adopted a smartphone Digivice as her regular phone. Piyomon tries to alert her to the messages that she is receiving from the other Chosen Children as they face a Digimon who has appeared in Tokyo, but she is too focused on perfecting her ikebana to engage in time. She also has a video call with Tachikawa Mimi (who is calling from her laptop). 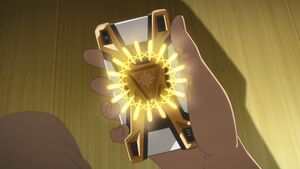 The countdown to the end of his partnership with Agumon appears on Yagami Taichi's smartphone Digivice.

As of the start of the film, all twelve of the core group of Japanese Chosen Child are regularly using smartphone Digivices as both their main phones and as a day-to-day replacement for their original Digivices. Izumi Kōshirō uses them to help coordinate the Chosen Children's efforts to stop Digimon who have appeared in Tokyo, sending live information and updates to the Digivices. They still keep their original Digivices in safe places.

During their initial battle with Eosmon, the countdown rings appear on the backs of Yagami Taichi and Ishida Yamato's smartphone Digivices, as well as their original Digivices in storage.

After Tachikawa Mimi is hospitalized with an Eosmon-induced coma (Eosmon having tracked and attacked her through her smartphone Digivice), Yamato advises the team that he puts together to help investigate Menoa Bellucci and Yamada Kyotaro (Taichi, Kōshirō, Motomiya Daisuke, Ichijouji Ken, Inoue Miyako, and Hida Iori) to discontinue use of their smartphone Digivices in order to avoid being attacked by Eosmon. Instead, these Chosen Children start using their original Digivices again, and use burner phones and public payphones as less traceable alternatives for phone communication.

While smartphone Digivices themselves do not have any cards, Takaishi Takeru and Yagami Hikari are depicted holding theirs on the card BT6-089 Takaishi Takeru & Yagami Hikari. This card is one of two sources that depicts Takeru's smartphone Digivice as green (matching his D-3's color), instead of yellow (matching his activated original Digivice's color) as it is in Kizuna.