Hida Chikara is a supporting character in Digimon Adventure 02. 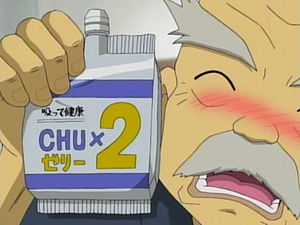 Chikara and his "chu chu."

Chikara is the father of Hida Hiroki, father-in-law of Hida Fumiko and grandfather of Hida Iori. He is a wise and traditional man, who often provides Iori with important advice. Though he can be stern and serious and has many old-fashioned ideals, he is kind and good-natured and can sometimes be a bit humorous. He is well-known for his love for yogurt packets.

Chikara is a retired police officer and a kendo master, who now teaches kendo in the local police precinct. He trains Iori in kendo.

When Chikara's son, Hiroki, was a young boy, he became enamored with a world he discovered through his game console. He spent hours talking to the television, a thing that worried and disturbed Chikara. Eventually, Hiroki shared this world with his best friend, a boy named Oikawa Yukio, and the two would spend even more time together in front of the game console and the television than Hiroki did when he was alone. Eventually, Chikara decided to put an end to this, and took the video games away from them. Since Hiroki spent too much time with Yukio, Chikara tried to separate them and forbade Yukio from entering his house again. Although the two were heartbroken, Hiroki and Yukio remained friends and didn't stop fantasizing about that world, vowing to go there in the future.

Years later, Hiroki grew up and became a police officer. He married a woman named Fumiko and in 1993, the two had a son, Iori. Throughout this, Chikara continued to live with the family.

In 1999, a tragedy occurred. While on duty, Hiroki took a bullet for an important political figure, losing his life. Chikara stepped in as the provider of the family, and became something of a father figure to six-year-old Iori.

After Hiroki's death, Chikara noticed Oikawa Yukio was coming to Hiroki's grave often. Noticing Oikawa's despair, he realized that losing Hiroki was hard for him as well, and thought of reaching out and giving Oikawa a hand in friendship. However, he never acted on this thought.

On August 3rd of the same year, Chikara, Fumiko and Iori were passengers on a plane that arrived at Tokyo soon after the Digital World appeared in the sky. The plane froze, but was saved from crashing by Kabuterimon and Garudamon. It was then when Iori was chosen to fight for the Digital World in the future.

Around 2001, the Hida family moved to a new apartment building in Odaiba.

Throughout most of the series, Chikara was mostly in the background, occasionally giving Iori some nuggets of wisdom that deeply influenced the boy's actions. However, it wasn't until December 2002 that Chikara discovered Armadimon's presence in the house and recalled Hiroki's fascination with the world in his game console. Finally finding out the name of that world, Chikara told Iori of his father's connection to the Digital World.

The next day, as the Chosen Children confronted Oikawa Yukio, who had become their foe, Chikara appeared and tried to talk to Oikawa's heart, apologizing for everything he had done and extending his hand in friendship. Oikawa was deeply moved and was intending to accept Chikara's offer, but the spirit of Belial Vamdemon that resided inside him veered him from this and tried to harm Chikara with a huge burst of dark energy. Black War Greymon stepped before Chikara and took in the blast, saving the man from certain death.

Chikara was in Mikami Canyon with Fumiko and the rest of the Japanese Chosen's families when the Real World was covered by Belial Vamdemon's darkness.