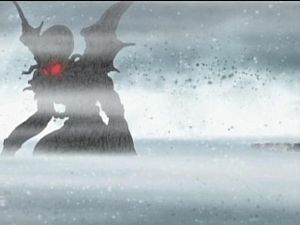 Several Dagomon appeared from the polyhedron alongside many other Virus Digimon. One of them flew by Adventure:'s Yagami Taichi and Agumon, alongside a Gigadramon, but both were then destroyed in one V-Breath Arrow by Zeromaru as Aero V-dramon.

Dagomon is an obtainable Variable Move. Its attack, Forbidden Trident, deals damage to one enemy. It costs 16 VP.

Dagomon can be found at the Amaterasu Oceans.

Dagomon technically doesn't appear in Cyber Sleuth, however the ghost of the dead school girl who the Inoden Occult Research Club, Aiba Takumi/Aiba Ami and Kuremi Kyoko accidentally summon from another realm is revealed in Digimon Story: Cyber Sleuth Hacker's Memory to be a Dagomon in disguise by Douguchi Lily and Amazawa Keisuke.

Dagomon is also available as a Digimon Medal.

Dagomon is #173 and is a Water Virus Type, Perfect level Digimon and uses 12 memory. It evolves from IceDevimon, Coelamon and Raremon and can evolve to Neptunemon, EBEmon and Leviamon. Its special attack is Forbidden Trident and its support skill is Deep Sea Slumber which gives all attacks a 10% chance of putting a Digimon to sleep.

Douguchi Lily hires Amazawa Keisuke to help her deal with a "ghost" that she and her friends in the Inoden Occult Research Club (and also Aiba Takumi/Aiba Ami and Kuremi Kyoko) accidentally summoned from another realm, which is supposedly the ghost of a girl who killed herself by jumping in front of a truck. Lily claims to be a spirit medium, meaning she has the ability to send the ghost back to where it came from but doesn't want any of her friends to know. They track down the ghost in Shibuya, though suddenly countless copies of her appear. After chasing down multiple of them, they find the original one, which reveals itself to be a Dagomon in disguise and alongside Lily's Kyubimon, which was originally her "familiar", which her shocked to see it now being a Digimon, defeat the Dagomon. It escapes into the Shibuya underground however and has to be chased again, with more impostors on the way. They find the real one again and after Kyubimon evolves into Taomon they defeat the Dagomon once again and send it back to where it came from.

Dagomon is also available as a Digimon Medal.

Dagomon is an unobtainable Leader Digimon.