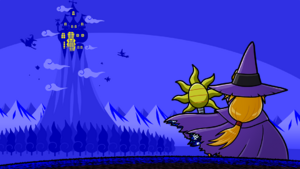 Witchelny (ウィッチェルニー, Wiccherunī), also knwon as World of Medieval Magic (中世魔術の世界, Chūsei Majutsu no Sekai), is the Digital World of another dimension.[1][2][3][4][5] It is named after the main setting of Magical Witches, a series of magic book-shaped virtual pets released by Bandai in 1998, as well as being a project that Watanabe Kenji was involved in.

Witchelny is one of the many Layers (Dimensions) of the Digital World, also considered a Digital World of another dimension.[1][6][7] Digimon in this dimension developed an ability known as magic (high-level programming language), and the land is occupied by four clans that specialize in different kinds of elemental magic: Earthlin of the earth, Aquary of the waters, Eneruge of the flames, and Baluluna of the winds. The land is ruled by the elders of each clan, as well as the three sage Digimon leading the council that governs said clans. A long time ago, the clans worked together to establish a magic school atop Mount Brocken, a big mountain that lies in the center, around which the land is split into four blocks for each cardinal direction, with each one of them being occupied by a clan.[8] Digimon of this area sometimes travel to the normal Digital World in order to further their own skills, such as Wizarmon[1] and Witchmon[2], while some Digimon from the Surface Area travel to Witchelny in order to learn Magic.[9] In ancient Witchelny, when sorcery was still immature and had no means for it to defend itself from foreign invasions, it was on the road to ruin, but Medieval Dukemon, one of the "Vortex Warriors" (a group in Witchelny who fight using weapons made from wind sorcery), suddenly appeared and completely repelled the invaders.[5]

Kodo Ritsu and Pulsemon learn of Witchelny from Espimon in "Spy Digimon Espimon", who thinks they may be able to find information about Asunaro Village's curse by going to it. He describes it as another dimension of the Digital World, with a magical academy where the Digimon could use magic (a high-level programming language). To learn how to get there, they meet with Wizarmon in "Wizarmon of Memory Ocean", however, while he could briefly remember things, his amnesia meant he could not help them at all, and trying to get knowledge out of him would send him into a frenzy.