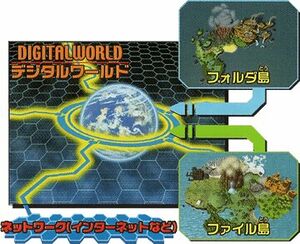 A Digital World (デジタルワールド, Dejitaru Wārudo) is huge world that exists in a different dimension than the Reality in which human beings live. It is assumed that the all existence is reduced to data in this huge digital space, and because no one can see the entirety of all the Digital World, its existence still remains a mystery.[1]

Human technology has opened the door to another "Reality" that can not be measured and some people say that the human race has reached a turning point of destiny as a species.[1]

In the earliest stages of its existence, this incarnation of the Digital World was little more than a barren desert. As it grew alongside the Earth's communications network, however, it evolved and changed in dynamic ways, with more and more "layers" coming into existence over the top of the old ones. The lowest layer is the original desert plain, and the highest is the home of the Four Holy Beasts that rule the Digital World. In between lie many small miniverses, self-contained environments specially suited to the Digimon that live there, including (but not limited to) an area of clouds and clockwork; a warped, black-and-white town; an area of forests, lakes and rivers; and a world entirely composed of water that contains the Digital World's database.

Random packets of discarded data often roam the Digital World like tumbleweeds and can be used to help repair and heal injured Digimon. Although the Digital World has both night and day, there is no transitional period between the two, with darkness instantly sweeping across the world like a sheet. Visible in the sky no matter what plain it is viewed from is a pulsing globe of code and light, which represent the Earth—from it emanate data streams, vast columns of energy which reach into the Digital World and manipulate its digital matter, physical representations of acts performed on computers across the world. Should an individual be caught in a data stream they will be swept into it and deposited elsewhere on any of the Digital World's potential planes. Between Earth and the Digital World is a warped region of interdimensional space where reality is constantly in flux and defined only by the perceptions of individuals passing through it.

Digimon are, in fact not native to this Digital World, having been created by a group of teenage computer programmers in the late 1980s as an experiment into the development of artificial intelligence. When the project was shut down due to a lack of funds their primitive digital lifeforms accidentally found their way into the Digital World where they began to grow and evolve. One of the programmers, Shibumi, observed this and wrote an algorithm that allowed the Digimon to evolve beyond their original specifications and truly become individual lifeforms. Four Digimon in particular evolved into especially powerful forms and became the aforementioned Four Holy Beasts. The Digital World does have native lifeforms, however, in the form of DigiGnomes, the first form of artificial life who evolved from the matter of the Digital World itself before the Digimon. The DigiGnomes tend to the welfare of the Digital World and have mysterious powers that allow them to grant the wishes of others.

While conducting secret information-gathering on the network the Japanese SIGINT organization Hypnos became aware of the existence of the Digital World and Digimon which they dubbed Wild Ones. Sometime after this Digimon began to appear in the real world, possibly due to Hypnos's inadvertent creation of a "weak spot" in the borders between the worlds with the use of the Juggernaut, a program designed to send errant Digimon back to Digital World or erase their data from the Real World. Digimon materialize on Earth through a process known as "Realization," which begins when the barrier between the worlds is temporarily sundered to allow their passage through. The interaction of the two dimensions creates Digital Fields—small gray fog banks which allow Digimon to synthesize false proteins and convert themselves into physical forms after interacting with Earth's electromagnetic field. These Digital Fields can appear in random locations instantaneously and often with little warning.

In addition to Hypnos and the original programmers the Wild Bunch, initially the only humans to be aware of Digimon and the Digital World are a small group of children known as Tamers. These Tamers had been chosen by the DigiGnomes to become partners with Digimon and the creatures had used Shibumi's algorithm to bond human and Digimon together as partners via the D-Ark. However, with the progression of the series and the increase in Digimon activity on Earth escalating from small skirmishes between the Tamers and Digimon (with little to no damage to the Tamers' home city) to more devastating occurrences and eventually a massive, city-devastating battle with the Deva and finally the full-scale invasion of the D-Reaper the existence of Digimon and the Digital World eventually became public knowledge.

This version of the Digital World is divided into ten regions in which each one represents the element of each of the Ten Legendary Warriors. Each region has a terminal which is used by the Trailmon to transport the various Digimon across the criss-crossing railway tracks to different areas of the Digital World. Everything in the Digital World, from land to individual Digimon, is made of DigiCode.

In the series, this is mostly seen by the villains trying to give enough power to Lucemon to brake free from the Dark Area. The DigiCode can also be "rendered" which results in the data being put back into its normal place. If a Digimon loses its DigiCode they would revert back to a Digitama and return to the Village of Beginnings to restart the life. The Digital World is also orbited by Three moons that are named after the three Great Angels and each are different colors: the blue Seraphimoon, the yellow Ophanimoon, and the red Cherubimoon. The Seraphimoon is inhabited by a colony of Starmon with a Super Starmon as their leader, and it was also the home to Insekimon and Burgamon. The Ophanimoon is home to a Rebirth Village where, just like the Village of Beginnings, Digimon whose data has been destroyed can be reborn.

At one point in time, the Digital World was said to be one world, but due to a currently unknown calamity, it split apart into 108 Zones which are separated by Digital Space. It was later reformatted by the Bagra Army into eight large kingdoms called Lands.

At one point in time, the Digital World was said to be one world, but due to a currently unknown calamity, it split apart into 108 Zones which are separated by Digital Space.