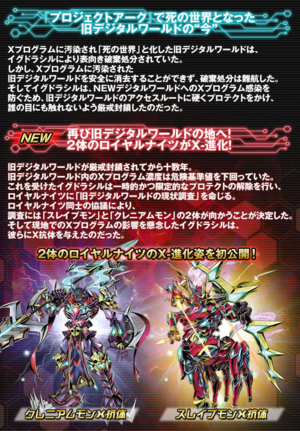 The "Current State" of the Old Digital World, Transformed into a World of Death by the Project Ark

NEW: Back to the Old Digital World! The X-Evolution of Two Royal Knights

The Movements of the Seven Great Demon Lords[2]

Demon: This is Demon, who continues to vigilantly plan his revenge against the forces of good that had caused him to fall, even after the old Digital World had shutdown. His goal is the rebirth of the "Super Ultimate level Digimon", but thinks that with the X-antibody, he will obtain the power to become a Super Ultimate level Digimon himself, and begins to take action of stealing the X-antibody from other Digimon.

Beelzebumon: This Digimon did not show any interest in what was taking place in the old Digital World, and continued to live the way he liked as a loner. He obtains the X-antibody on his own, as well as gaining the ability to summon "El Evangelio", further solidifying his position as one of the Seven Demon Lords.

Barbamon: This is Barbamon, who steals all sorts of treasure from others, as much as his greed allows it. He lost interest in the old Digital World after it was wasted away by Project Ark, and plans to invade the new Digital World in search of new treasure. He thinks that he can do away with any opposition if he can X-evolve, so comes up with a plan to obtain the X-antibody.

Belphemon: He was in Sleep Mode even before Project Arc began. Because he automatically attacks all who approach him, it's hard to tell whether or not he's really asleep. Many evil Digimon have tried to attack Belphemon because they see his Sleep Mode as an opportunity, but none of them have survived his automated attacks.

Leviamon: Leviamon sleeps deep on the ocean floor of the "Dark Web," a network that's next to the Dark Area. Because of his enormous size, no one has dared to touch him. Because he was asleep during Project Arc, he was not influenced by the motives of those around him, and he remains in the Dark Web as a symbol of awe.

Lilithmon: Her pursuit for beauty led to her concluding that X-evolving would make her even more beautiful, and so she has been stealing the X-antibody from other Digimon. She awaits the best moment for when her X-evolution will gain the attention of the most witnesses.

Lucemon Falldown Mode: He plans to not only destroy the old Digital World, but all Digital Worlds. His first step is to continue laying out plans as he waits for contact from the new Digital World, so that he'd be ready at max invasion potential when that time comes. In order to eliminate the Royal Knights so they won't hinder his invasion, Lucemon Falldown Mode thinks that he will also need to get the jump on the other Seven Demon Lords, and so uses the current turmoil to this end. He intends to make the other Seven Demon Lords his pawns one day and destroy the world.