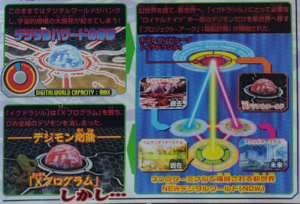 Due to the large amounts of data accumulated by the process of evolution and the flow of information that arrived from the network, the Old Digital World reached its maximum capacity. If this situation was not resolved, a Digital Hazard would accour and the Old Digital World would explode, killing even Yggdrasil itself in the process. So, to prevent this, the host computer Yggdrasill initiated the Project Ark (プロジェクト・アーク Purojekuto āku) (dub: Project Arc), a multi step emergency plan which consisted of creating a New Digital World outside of Yggdrasil, so that the data would not be stored on the host computer itself. 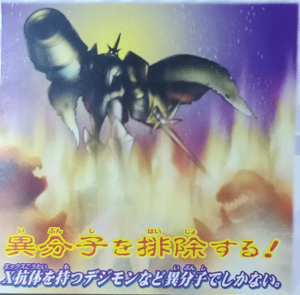 Chosen Digimon like the Royal Knights would then be transported to this new world, and the other 98% of Digimon remaining would be deleted by the Program X, a special program made to sistematically delete every single Digimon. Even so, strong enough Digimon resisted the effects of the X Program and were able to survive by altering their Digicores. These Digimon were reborn in a form that incorporates the X Program itself into their Digicore, and thus created the X-Antibody, an antibody that grants resistence to the X Program. 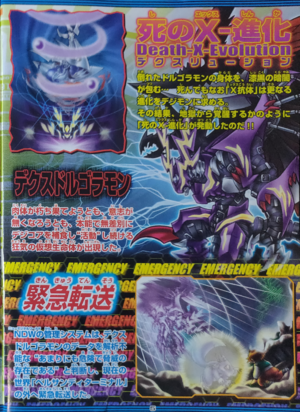 These Digimon fled to the New Digital World in order to escape from the influence of the X Program, but Yggdrasill, detecting them as foreign molecules, deployed the Royal Knights to eliminate them.[1][2] But, to effectively erase these Digimon, Yggdrasil also awakened the Death-X from the depths of its storage, an old relic of evolutionary research that artificially increases the survival instinct to its limit, causing a digimon to overcome the very concept of mortality by incorporating other digicores to its own, making the digimon undergo an special type of evolution known as "Death-X-Evolution". 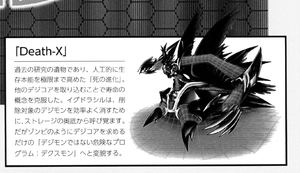 However, this led to the birth of Death-X-mon, dangerous program that isn't even a Digimon, and that was now endangering the New Digital World.

In the movie, Project Ark actually had a "second phase" in which all digimon would be deleted by activating the Death-X-Evolution. At the end it is revealed that Yggdrasil's true intentions where to use DORUmon and the Royal Knights to help it restart the New Digital World, and that all of its actions where motivated by the fear of dying because of the Digital Hazard.