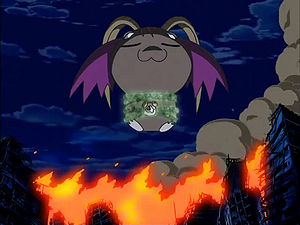 Belphemon Sleep Mode's Digitama was found sealed away in some ruins discovered by Kurata Akihiro. On a whim, he decided to nurture the DigiTama, it eventually resulting in Belphemon. Kurata proceeded to collect Digimon life energy to strengthen and awaken Belphemon to use as a weapon. Using a command device created by Thoma, he awakened Belphemon Sleep Mode. Belphemon seems to be completely invincible while asleep, being completely unscathed by any attacks by the DATS team and even several missiles.

After the bomb in the command device breaks and Belphemon Sleep Mode becomes stationary, Kurata fuses himself with Belphemon, causing him to wake up and evolve into Belphemon: Rage Mode.

Belphemon (Sleep Mode) is a Mercenary Digimon which can evolve from Astamon at level 41 and can further evolve to Belphemon (Rage Mode) at level 70 with the item Alarm Clock, referring to the awakening of its true form.