When Impmon accepted an offer from Caturamon for power, he evolved to Beelzebumon. He tried to kill the Tamers and their partners, and eventually stabbed Leomon, Juri's partner, with his Darkness Claw, killing him. This infuriated Takato, who forced Megalo Growmon to evolve into Megidramon to kill Beelzebumon, but he went on a rampage and eventually reverted to Guilmon. Following that, Takato and Guilmon Matrix Evolved together into Dukemon, who nearly killed Beelzebumon. However, Beelzebumon was spared by Juri. By the time Beelzebumon appeared again, he was determined to repent for his sins, and evolved further into Blast Mode.

The Beelzebumon from Digimon Tamers appeared as a silhouette in episode 78, "The Gathering of the Legendary Heroes! The Digimon All-star Showdown!!" alongside Takenouchi Sora and her partner Garudamon, he was fighting one of the rock entities created by Quartzmon in an unknown location.

Beelzebumon is only seen in the opening cinematic of the game, riding Behemoth to fight Dukemon, and then proceeds to evolve into Beelzebumon: Blast Mode to continue the fight.

Evolves from Skull Satamon at level 41. Evolves to Beelzebumon Blast Mode if one of the best Impmons of the server or by Special Card Evolution. 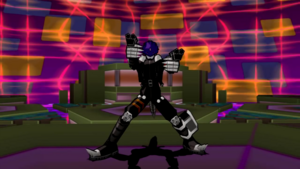 Beelzebumon from Digimon Savers: Another Mission

Beelzebumon is one of the Seven Demon Lords, and is the only obtainable one, after defeating Belphemon.

Beelzebumon is a boss Digimon as well as an obtainable evolution of Piyomon.

Evolves from Skull Satamon at level 41. Evolves to Beelzebumon Blast Mode by Burst Evolution with a Toy Gun.

Beelzebumon is an obtainable Digimon which is evolved from Vamdemon. It can also be obtained as a collectible card. Its card is part of the Seven Great Demon Lords (七大魔王 Nanadaimaou) set.

Beelzebumon is the main evolution of Impmon, one of the twelve playable characters.

Beelzebumon is the partner of Kamiya Shingo.

Can be obtained by using the "Berenjena" item on any Digimon Child level or above. Can also be obtained as a Burst Evolution of Mammon. Can Burst Evolve into Lucemon: Satan Mode.