The Wizarmon in Adventure pretended to be one of Vamdemon's soldiers, trying to find the eighth Chosen Child. He found Hikari's Digivice, then told Tailmon about her past, and united the two for the first time. After this, he and Tailmon went to get Hikari's Crest from Vamdemon. However, they were caught, and Vamdemon wounded Wizarmon. The Digimon was then thrown into the harbor. Eventually, he was discovered by Kido Jou and Takaishi Takeru, who were travelling to find the others on the newly evolved Zudomon. He helped Lilimon, 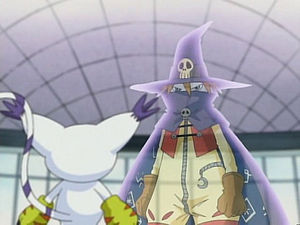 Appears as a ghost in the TV station, and warns the Chosen Children about Ken. He says "Kindness will release the Golden Radiance" This is referring to the Digimental of Miracles. 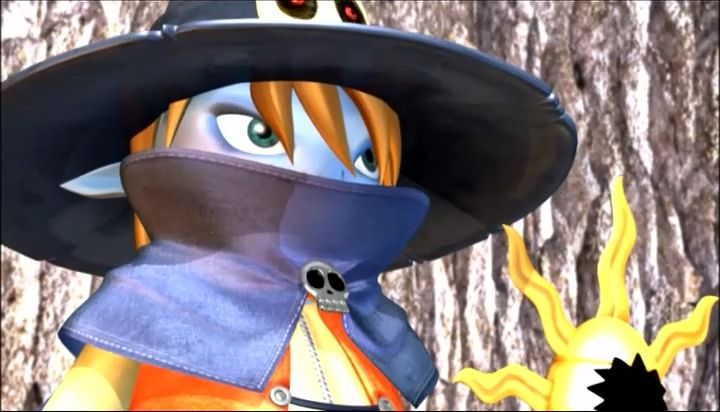 Its silhouette appears when the Old Clock Shop Man tells how Quartzmon created the DigiQuartz.

In "Our Future", Wizarmon briefly appears to Hikari to help her communicate with Tailmon while she is inside Ordinemon's body. 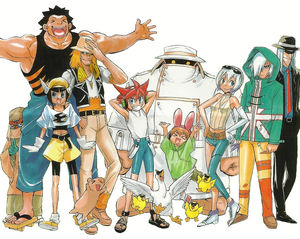 A Tamer-owned Wizarmon appears as part of the audience of the Battle Stage.[50]

A Wizarmon is one of the Digimon who cheer the heroes on in the final fight against N.E.O[51].

In the track "Before the World Ends", Wizarmon and Tailmon are searching for the Crests to Vamdemon. Here, he reveals that he came from another World.

Wizarmon is an obtainable Digimon. Evolves from Patamon (6-7 DP) and can evolve to Digitamamon (0+ DP).

Can be evolved from Lopmon if above level 16, or can be found at Chrome Mine. Can evolve to Andiramon if above level 27 and needs to be holding the "Data Core Fragment" item. It also gives you a request mission to obtain a 100% scan data of Raremon for its experiment at Sewage Tunnel. Wizarmon can also be seen working at the item shop in DigiCentral, standing next to Gabumon.

Wizarmon is the boss Digimon of Area 03 and is available to be-friend upon victory.