Drill Tunnel (ドリルトンネル Doriru Tonneru) is a tunnel in the Unwavering Forest of File Island.

The Drill Tunnel is a three basement story tunnel built to connect the Unwavering Forest directly to the foot of Mount Panorama, which leads to the Gear Savannah directly north of that. The Drill Tunnel is home to several Drimogemon, where they live in the Residence Ward and use the Underground Lake as a water source within the tunnel. The deeper parts of the tunnel is at an intense temperature, with lava all around. Some say that a great treasure lies deep down within the tunnel. 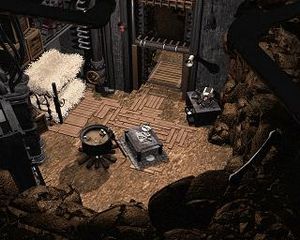 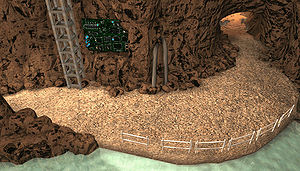 Within the Drill Tunnel are three Drimogemon. One is drilling deep in the lowest level of the tunnel in hopes of finding the great treasure rumored to exist. This Drimogemon will probably be able to complete his excavation by the time the Village of Beginnings' prosperity rating reaches 45 or higher. Since the road to Mount Panorama is blocked by a recent landslide said to be caused by a Digimon within the Drill Tunnel, another Drimogemon is working in the Underground Lake of the tunnel, attempting to drill further within the tunnel to find the cause of the landslide, as well as a recent increase of temperature within the tunnel. This Drimogemon would appreciate it if someone would help him carry the dirt of the wall he is drilling, and is willing to pay someone for transferring these dirt out of the tunnel. If the landslide can be cleared, this Drimogemon would probably decide to join the city after completing the alternate route to Mount Panorama. The sudden temperature increase has caused the final Drimogemon that is living within the Residence Ward to go crazy, and it will commence attack if bothered. If someone could knock some sense back into him, he would probably appreciate the help and direct the person to help the Drimogemon at the Underground Lake.

A gang of Drimogemon has been sighted at Drill Tunnel, engaging in possibly suspicious activities. All attempts at traversing the tunnel are turned away by the trio, who claim that they are currently preoccupied. Perhaps they know something about the sudden disappearance of Gabumon, the manager of Digi Bridge...?