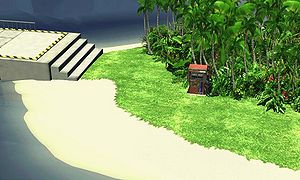 The Digi Bridge is the bridge that will connect Unwavering Forest to Tropical Jungle once it is completed. There seems to be a direct route that connects this area with the Village of Beginnings, but apparently it is being blocked by weeds and trees. A sort of abandoned building now used for storage is near the bridge, which may be a good spot for black marketing to take place.

It is said that Coelamon is currently working on completing the bridge, and may be found at Coela Point during its break time. Some reports tell of a Digimon resembling a ninja last spotted around this area, who may reveal itself when it deems someone worthy of the secret information it holds about items.

Kunemon stands guard at the bridge, and is not willing to let anyone through. Upon defeat in battle, Kunemon will reveal that the bridge was originally managed by its friend Gabumon, who has recently gone missing after leaving behind a very suspicious note. The Digi Bridge cannot be crossed until Gabumon is found once again.