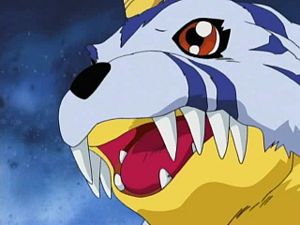 Close up of Gabumon from Digimon Adventure. 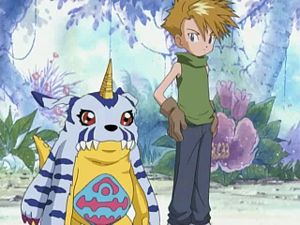 Yamato and Gabumon from Digimon Adventure.

Gabumon is the partner of Ishida Yamato.

A Tunomon at Togemon's Elementary School became a Gabumon during a soccer match with the other children, which was why the other students did not like Tunomon. Tunomon evolved to Gabumon and saved another Digimon during a flood.

Gabou was a Gabumon who lived at Holy Angel Castle. He found Yagami Taichi while being chased by a Tortamon and took him to see Lord Holy Angemon. Gabou accompanied Taichi and Zeromaru throughout their journeys.

A Gabumon is one of the Digimon who cheer the heroes on in the final fight against N.E.O[100].

Gabumon is the partner of Ishida Yamato. Gabumon helps the Chosen Children solve the problem in Odaiba playing the role of the Azure Dragon, Qinglongmon of the Four Holy Beasts.

Gabumon appears as an obtainable Child-level Data type Digimon in Digimon World. When the Player starts the game, he's asked by Jijimon two questions, and if you say "No" or "Night" to his questions, you'll receive a Gabumon as your first Digimon, otherwise if you answer "Yes" or "Day", you'll receive an Agumon instead.

A Gabumon is found hiding in Misty Trees. After you completed Tonosama Gekomon and Jyureimon's quests, Jyureimon will dissipate and clear the fog of the Misty Trees making it easier to see, so a Gabumon will be revealed hiding in a corner of a cliff at the north of Misty Trees. When you talk to it, it will engage a battle and once it is defeated, it joins the city, and assists Drimogemon in the Treasure House because it's bored and has nothing else to do. It only appears if you have recruited Drimogemon.

Several Gabumon also work for Orgemon as members of the "Bandits" that the Player has to defeat, as he's assaulted by some in the Great Canyon and are found guarding the Ogre Fortress. After the Player defeats Orgemon for the first time, the gang of Gabumon will decrease by two, and finally separate from their boss when it has been defeated for the second time in the Secret Beach Cave, home to Whamon.

Koromon evolves into Gabumon after 24 in-game hours have elapsed only if its Defense, Speed and Brains stats are higher as opposed to Agumon's HP, MP and Offense stat requirements. Gabumon can also evolve into 10 different types of Digimon depending on the stats and Care Mistakes made:

Gabumon spits out a fiery breath against the enemy, burning them.

Gabumon is a playable character. He can evolve to Omegamon.

Gabumon is a playable character. He can evolve to Metal Garurumon.

Gabumon is a collectable green card with 4/3 stats.

Gabumon is a playable character.

Gabumon is a playable character. He can evolve to Garurumon, who evolves further to Metal Garurumon.

He can be evolved from Tunomon if above level 7, or can be found at Data Forest if Tunomon was your chosen partner at the beginning of the game. He can evolve to Garurumon if above level 18 and Attack above 120.

An NPC Gabumon works at the shop next to Wizarmon in DigiCentral, selling weapons, armors, and accessories.

Can be obtained if Gaomon meets the conditions.

Gabumon is an obtainable Digimon. Can be evolved from Tunomon if you have 20 Beast-AP. He can evolve further to Ikkakumon, Garurumon (Black), Gururumon or Garurumon.

Gabumon is an obtainable Digimon which is evolved from Koromon or Wanyamon, and can evolve to Gaogamon, Garurumon, Greymon, or Tailmon. It can also be obtained as a collectible card. Its card is part of the Garurumon Evolution (ガルルモン進化 Garurumon Shinka) set and the 3 Color Gabumon (３色ガブモン Sanshoku Gabumon) set.

Gabumon is an unlockable fighter. His main evolution is Metal Garurumon, and his Super Evolution is Omegamon. It can also be obtained as a collectible DigiCard.

Evolves from Tunomon. Can evolve to Garurumon.

Gabumon can be summoned in the Arcade component of the game by a special 20th Anniversary card.