A Jyureimon went wild in New York but Motomiya Daisuke, Tachikawa Mimi and the American Chosen Children worked together to pacify Jyureimon, Lilimon shoot his Flower Cannon and turns Jyureimon calm, and the Chosen Children return him to the Digital World. 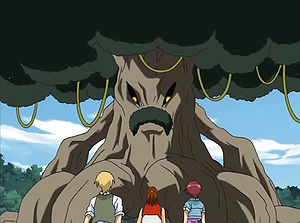 A group of Woodmon evolved into Jyureimon due to Culumon's evolutionary powers.

Jyureimon guarded the wood element sphere of Sephirothmon. Shibayama Junpei spirit evolved into Blitzmon to battle him and defeated him.

A Jyureimon guarded a misty forest and risked his life to protect the Digimon there, including a group of Nyokimon.

In the Misty Trees region, a thick fog covers the land and prohibits passage into Toy Town and Freezeland. Tonosama Gekomon grants minor protection from the fog to Hiro, but only by meeting Jyureimon can the fog be made completely passable. Jyureimon is a remarkably wise, intelligent digimon who offers to teach Hiro and his partner. Choosing partner will initiate the "Teachings of the Forest" training, which boosts intelligence and MP. If Hiro chooses to listen himself, Jyureimon reveals a great deal of information that, while it isn't necessary to progress, illuminates some of the mystery surrounding the memory crisis.

Jyureimon is the holder of the Misty 7s card.

Jyureimon is an unobtainable enemy Digimon.