Negamon, known as the Great Catastrophe, is the main antagonist of Digimon Adventure:, and the Digimon behind other important antagonists such as Devimon, SkullKnightmon, Millenniumon, Soundbirdmon and Algomon.

Despite going through multiple forms in its fight against the Chosen Children, it is only ever referred to as Negamon in-series. 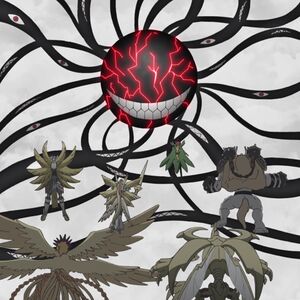 The Chosen Children and their Digimon fighting against Abbadomon.

It later appeared as a silhouette in "Countdown to Tokyo's Annihilation", watching on angrily after the defeat of Nidhoggmon. It continues the countdown that stopped after Nidhoggmon's death. Negamon then opens a portal which sucks in the Chosen Children and their Partner Digimon, with the exception of Taichi, Yamato and Omegamon.

In The Mystery Hidden Within the Crests", shortly after Zeed Millenniumon's death, Negamon senses the Chosen Children's Crests reacting in the Giant Tree of Information. It sends a swarm of Soundbirdmon into the Digital World to brainwash Burpmon to eat all the data regarding the Great Catastrophe to prevent to the DigiDestined from learning about it. However, the Chosen Children manage to destroy Burpmon and although the data is scattered, Izumi Koshiro and Gerbemon set to work on recovering it.

In "Contact from the Catastrophe" Negamon sends a group of Algomon to test Taichi and Agumon in a experiment to test the power of the bond between a Chosen Child and a Partner Digimon. After War Greymon destroys the other Algomon, the Perfect Algomon states that its master would soon make its move and erase the Digital World from existence through the Great Catastrophe. The Perfect Algomon then returns to its master in the Network.

In "The Angels' Determination", After the Chosen Children have discovered the full powers of their Crests, Negamon sends a legion of Soundbirdmon to attack the Giant Tree of Information while the other Soundbirdmon are sent across the Digital World to show the Digimon that the Great Catastrophe is about to begin.

In "The Great Catastrophe, Negamon", inside its black orb, which is in the white void, protected by its servant, Algomon, who described it as the one who consumes all. It used its tentacles to trap the Chosen Children, which would've killed them were it not for their Digivices:' barrier, and then forced them into the void. As Algomon fought the Chosen Children, it explained that Negamon was the negative law and disaster of the Digital World, as well as their reason to exist and their instinct, and that Negamon, as one of two instincts that reached the Real World, chose the negative, chaotic energy from the human network as the power source to produce the next disaster, using it to evolve its Algomon lackeys, Nidhoggmon and Devimon, while those who resonated with the waves of destruction such as the Vademon and Millenniumon joined them. The negative energy of the network had surpassed even Negamon's expectations, which produced more hunger, consumption and satisfaction, which would then drive Negamon to consume all and evolve into the ultimate destruction, leading the world into the complete end where nothing is born or will ever begin. Izumi Koshiro then realized that Negamon's real purpose had been overwritten by the swelling power of the network, turning it into a creature that existed only to consume as described by Ishida Yamato. As it evolved into Algomon (Ultimate), Algomon explained that Negamon's instinct would reach the ultimate destruction, where it would consume the soul and an infinite void would come. After Algomon was killed by the Chosen Children, it said that the time had come for Negamon to consume all.

After Algomon's death, in "The Last Miracle, the Last Power", Negamon evolved into its evolved form. Unlike before, where it was passive, it went into the offensive after evolving, which Kido Joe inferred that it meant it felt threatened by the Chosen Children. With Seraphimon and Ofanimon breaking through its darkness; Rosemon, Vikemon, Herakle Kabuterimon and Hououmon destroyed its tentacles that were crossing over to the Real World and Realizing; and War Greymon, Metal Garurumon and the angels broke into the sphere of darkness to find Negamon's main body and lure it outside, with War Greymon finally destroying it with a Gaia Force from inside its mouth after being attacked from outside by Metal Garurumon's Grace Cross Freezer. However, it was merely a shell, and destroying it only Abbadomon Core and turned the sphere of darkness that surrounded it into Abbadomon.

Abbadomon then dragged War Greymon, Metal Garurumon, Seraphimon and Ofanimon into its darkness and ate the existences of Takenouchi Sora, Hououmon, Koshiro, Herakle Kabuterimon, Joe, Vikemon, Tachikawa Mimi and Rosemon, while sending even more tentacles into the Real World. The remaining Digimon tried to fight Abbadomon, but it was in vain as no attacks would even make contact with it. However, the Chosen Children got a second wind thanks to the lights of hope of the Real World, which the eaten Chosen Children sent to the Holy Digimon, who gathered them and sent them to Yagami Taichi and Yamato, allowing War Greymon and Metal Garurumon to fuse into Omegamon for the third time. Omegamon, who Ofanimon described as "the ultimate miracle, the Holy Knight", was able to easily break a hole in Abbadomon without even needing to use a special technique, then plunged into it before it could heal.

As Taichi, Yamato and Omegamon arrived to where Abbadomon Core was in "The End of the Adventure", it asked them if they feared it, as it released a wave of energy and red lightning all around the Digital World. It referred to itself as the "one who consumes" as it showed its true form, and from there on as "nothingness" and "one who erases all" in multiple voices at once, as well as saying several negative emotions, before Omegamon and it charged at each other, with Abbadomon Core's Bingerard which Omegamon matched with his Grey Sword.

As Omegamon fought Abbadomon Core, Seraphimon and Ofanimon fought Abbadomon. Seraphimon destroyed a clump of tentacles that attacked him with his Seven Heavens, and then Ofanimon saved him from a tentacle that wanted to attack him from behind with her Eden's Javelin. Afterwards, they were joined by the other four Chosen Children and their Partner Digimon. At this point, Mimi noticed that Abbadomon was moving weirdly, which led Koshiro to realize that Abbadomon's control over its body was lacking since it was concentrating all its resources on the battle inside of it. As such, if they kept Abbadomon's attention, that would slow down Abbadomon Core's movements as well.

After several sword clashes, Abbadomon Core tried to bite Omegamon with its red arm, and while Omegamon managed to swat it away, he then got hit by Abbadomon Core's spear and nearly dropped to the ground. Abbadomon Core then tried to impale him with its Bingerard, but Omegamon managed to avoid it and counterattacked with two volleys of missiles from his right arm. However, Abbadomon Core was able to avoid the first and destroy the second, then shot Omegamon several times with its Death Charge, which Omegamon blocked with his Brave Shield but it put him at the defensive. One of the shots then turned into a Negamon (Evolved Form) which gnawed at the shield, though it'd end up being incinerated by the shield itself. Nonetheless, this gave Abbadomon Core time to shoot a charged beam at Omegamon, which he managed to block and redirect but not before being pushed back. Both Digimon then shot their respective cannons at each other, and in the light of the explosion caused by their clash, rammed each other with their melee weapons once again. They then tried to shoot each other at close range, but failed to, which Abbadomon Core followed by a barrage of Gaze Eraser beams from the eyes on its "cape", which Omegamon blocked with his own cape, which also hid a new shot from his Garuru Cannon from Abbadomon Core's eyes, causing it to get hit and its red half to get frozen. With Abbadomon Core distracted with its frozen arm, Omegamon tried to stab it in the abdomen, only for said abdomen to open like a mouth, dodging the sword. Said mouth then closed, trapping the Grey Sword and corrupting both Omegamon and his Chosen Children as Abbadomon Core released black lightning, and once again its voices talked about negative emotions and consuming all, which could be heard even from outside Abbadomon. However, the Chosen Children rejected said negativity, and the power of their Crests went into Omegamon, freeing him, Taichi and Yamato from the corruption. Abbadomon Core then tried to bring its Bingerard down on the trapped Omegamon, however, he deflected it with his right arm, which had turned into Omegamon Alter-S', thus giving him the Garuru Sword. Omegamon then released his original sword from Abbadomon Core's abdomen, then pushed him back with a double slash before turning his arms into two cannons: both his usual right arm and Omegamon Alter-S' left arm with the Grey Cannon. Omegamon shot both cannons at Abbadomon Core, which it tried and failed to block with another barrage of Gaze Eraser beams.

From beyond the smokescreen created by their clash, Omegamon fully evolved into Omegamon Alter-S. Abbadomon Core tried to rush at him, but he was stopped in place by his Grey Cannon, followed by a wave from his Garuru Sword that split Abbadomon Core in half. Unwilling to give up, it then turned into a shapeless abomination with a giant mouth which tried to eat Omegamon Alter-S, but it was easily destroyed by the fused Digimon that then turned back into Omegamon. While Abbadomon Core thought it would now vanish, its voice heard even outside of Abbadomon with the latter losing power as shown by its red lines fading away, Omegamon rejected that, since, as a Digimon, it would reach another evil existence or perhaps a good existence. However, Omegamon then rejected his own words, saying that Abbadomon Core should not be bound by either because Digimon held endless potential. Abbadomon Core then turned into a Digitama and disappeared, with Omegamon wishing it farewell and saying they would meet again.