From Wikimon
(Redirected from Crests)

In both the original and reboot continuities, each Crest is represented by a simple symbol. These symbols tend to appear on places and objects that are in some way related to the Crests, such as Digimentals and physical Crest items themselves, and are often seen manifesting when a Chosen Child uses their Crest's power, such as on Digivice screens, as glowing apparitions, and in stock footage of their Digimon evolving.

In Digimon Adventure and Digimon Adventure 02, the Crests initially have a physical form as small, trapezoidal tokens that fit inside Tags. These tokens are also just called "Crests". Before they are collected by the Chosen Children, the Crest tokens are usually enshrined in resting places that are emblazoned with the Crest Symbol, from which the token magically emerges when the appropriate Chosen Child approaches with their Tag.[1]

In Digimon Adventure:, the Crests' physical form is a set of eight massive stone monoliths, shaped identically to the original-series tokens, inside the Tree of Knowledge.[2] 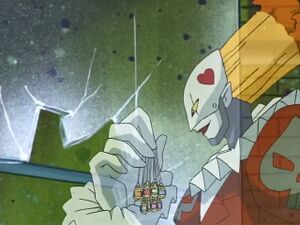 A holographic recording of Piemon's theft of the eight Crests and Tags.

The origin of the eight Chosen Children's physical Crest tokens is depicted in flashback. Shortly after the 1995 Hikarigaoka battle between Greymon and Parrotmon, Homeostasis's servants (Gennai and the others like him) created the Crests along with the Chosen Children's Digivices, Tags, and the Digitama of the partner Digimon, in a laboratory in the dungeons of what would eventually become Vamdemon's castle. Each of the traits associated with each Chosen Child's Crest is based on by the personality trait that were especially prominent in each at that moment, as identified by Homeostasis. When Piemon's forces assaulted the laboratory, he stole the Tags and Crests. Most of the Crests (separated from their Tags) would then come to be hidden in various resting places around the Server Continent, with the exception of the Crests of Love and Light, which ended up in the possession of Nanomon and Vamdemon respectively.[13]

In 1999, after their defeat of Devimon, Gennai instructs the seven Chosen Children in the Digital World to travel to the Server Continent and seek out their Crests so that their partner Digimon may evolve further to fight the enemy there.[14] When they arrive, they hunt for the Crests while dealing with Etemon and his minions. They use the glowing reactions of their Tags as a clue to find the locations of their Crests, enshrined in various structures and objects around the continent's desert.[4] The only Crest of theirs that they fail to locate themselves is the Crest of Love, which Nanomon puts in Takenouchi Sora's Tag when he abducts her as part of his plan to get revenge on Etemon.[3]

Yagami Taichi is the first to activate his Crest during the events at Nanomon's pyramid, when his shows of courage in rescuing Sora and standing up to Etemon first cause the Crest of Courage to glow, then trigger Agumon's Super Evolution into Metal Greymon.[3] Prior to this, he also improperly triggers it by being reckless and endangering himself deliberatley to force Greymon to evolve ("the wrong kind of courage," as Gennai later describes it[15]), instead causing him to Dark Evolve into Skull Greymon.[4]

While the Chosen Children are split up following Taichi's disappearance, Vamdemon and Pico Devimon hatch a plan to neutralize their threat by putting them in situations which alienate them from both each other and the traits of their Crests, with the aim of ensuring that they never activate their Crests:

However, these plans are all foiled, mostly by Sora who, despite wanting to avoid the others, assists the other Chosen Children from behind the scenes by using her knowledge of the plans to sabotage them. When the others regroup and track her down, she shares what she overheard about what each Crest represents with them, and Taichi draws the connection between their meanings and the reactions of his Crest in the events at the pyramid.[20]

When he travels to the Real World, Vamdemon uses the Crest of Light as a tool to locate the "Eighth Chosen Child". He creates replicas of the Tag and Crest that, like the original, will react when the Digivice is nearby, and distributes these replicas to his minions so that they can search Tokyo.[21] The real Crest is eventually stolen from him by Wizarmon, who returns it to its rightful owner, Yagami Hikari, in the final battle against Vamdemon.[7]

In the final moments of the battle against Venom Vamdemon, all eight Crests react together to create ropes of light that restrain him, which gives War Greymon and Metal Garurumon an opening to destroy him.[8]

The Chosen Children's final confrontation with Apocalymon marks the end of the Crests as physical items. Apocalymon uses Devimon's Death Claw technique to snatch the Tags and Crests from the Chosen Children before they can use them to evolve their partner Digimon, and destroys them. While at first the children think this means they can no longer evolve their Digimon past Adult, after Apocalymon banishes them to the world of data, they reflect on how their adventure has changed them and on their determination to stop Apocalymon no matter what. At this moment, the power of the Crests reacts within them, and they realize that the physical Crest items are unnecessary not only because the Crests merely symbolized traits inherent to themselves, but that they draw the power of those traits from each other. This enables them to evolve their Digimon into their strongest forms again and emerge from the world of data to face Apocalymon.[22]

As told by Izumi Kōshirō to Motomiya Daisuke's group of Chosen Children, some time after the defeat of Diablomon in 2000, Yagami Taichi's Chosen Children group was called back to the Digital World by Gennai. Per Gennai's request, they surrendered the power of their Crests to release "the force that protects the Digital World", in order to fix the distortions that remained after the defeat of Apocalymon and restore the Digital World, in doing so fulfilling "the real reason that they were chosen". However, this also resulted in them losing the ability to use their Crests to Super Evolve their partner Digimon to Perfect.[12] They would later learn that the "force" in question was the Four Holy Beasts, who had been sealed away by the Dark Masters. Specifically, the Crests of Hope and Light were used to release Qinglongmon, who reflected that those two Crests are inherently different from the others, because instead of powers inherent to the hearts of the Chosen Children like the other six Crests, Light represents what gives life to the world, and Hope represents never losing sight of the Light.[23]

While Daisuke, Inoue Miyako, and Hida Iori do not have any Crests of their own, they each become associated with two of the Crests belonging to Taichi's Chosen Children through their use of the matching Digimentals in 2000.[24]

A ninth Crest, the Crest of Kindness, also exists. It belongs to Ichijouji Ken.[25] Where it comes from is unexplained. Ken does not have a Tag and never uses it to evolve Wormmon. Instead, it is at one time tainted by darkness[23] and used to power the moving fortress that Ken, in his Digimon Kaiser identity, uses as his headquarters. The Four Holy Beasts temporarily transform it[23] into the Digimental of Miracles, for Daisuke to use to defeat the Kaiser.[11]

Without their Crest power, Taichi's Chosen Children must rely on the help of the Four Holy Beasts to be able to Super Evolve on rare occasions. For example, coming into contact with a Holy Stone suddenly empowers Patamon to Super Evolve into Holy Angemon, but he loses this power shortly after.[26] After all of the Holy Stones are destroyed and Qinglongmon is freed, Qinglongmon shares the power of one of its Digicores to restore Taichi's group's ability to Super Evolve.[27] Their partner Digimon later pass this power onto Imperialdramon, to enable him to Mode Change into Fighter Mode.[28] 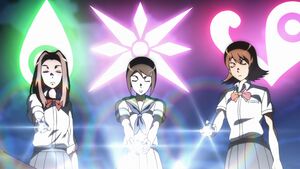 The Chosen Children channel their Crests to open a Digital Gate with Ichijouji Ken's D-3.

In the three years since Digimon Adventure 02, Yagami Taichi's group of eight Chosen Children have once again regained their innate Crest powers, including the ability to Super Evolve their partner Digimon. How and why this happened has not been explained.[29]

When the Chosen Children gather to enter the Digital World in search of their partner Digimon, Himekawa Maki suggests that they can open the Digital Gate by calling upon the powers of their Crests to synchronize with Ichijouji Ken's D-3. This plan succeeds.[9]

Yagami Taichi, Yagami Hikari, and Ishida Yamato continue to be able to use their Crests to Super Evolve their partner Digimon.

The cases of Chosen Children's new smartphone Digivices all feature depictions of their associated Crests. They also use their respective Crests as profile icons in the text messenger application.