In the Digital World the Digimon Kaiser captures several Digimon putting them under the control of his Evil Rings. Among these were several Gazimon, Gottsumon and an Unimon. One Evil Ring tries to control Tailmon, but her Holy Ring deflects it. The Unimon fires on Tailmon.

In the real world Takeru, now 11, leaves for his first day of school for that year. Natsuko apologizes for not being able to go with him. On the way he meets Miyako and Iori. Iori asks Miyako if she can fix his computer after school, which she agrees to after arranging for Iori's mother to make ohagi. Takeru sees a boy in a soccer game that he mistakes for Taichi at first but quickly sees that he is not. Takeru catches the ball after the boy missed it. The boy apologizes and Takeru passes the ball back before saying that the goggles that the boy was wearing were cool. Some of the other players called the boy back to the game revealing his name to be Daisuke.

In the classroom, Daisuke is glad to see that he is in the same class as Hikari. She greets him, and he tells her of his meeting with a guy who told him that his goggles were cool.

Elsewhere in the Digital World Agumon, having been badly beaten by the Digimon Kaiser's Digimon, calls to Taichi who receives the message via his Digivice.

At the school, Takeru is introduced to the other students as a new student. He is seated next to Hikari. Takeru says that it's been a long time, and she compliments him for getting taller. Daisuke gets upset at seeing a new guy being so familiar with Hikari.

In the Digital World, Tentomon, Patamon, and Piyomon flee from a Snimon controlled by an Evil Ring. Snimon knocks Tentomon and Piyomon out of the sky with his Shadow Sickle attack. Patamon hides in a tree. Taichi finds Agumon and tells him to evolve, but Agumon explains that he can't. The Digimon Kaiser watches them and laughs, saying that the area was under his control, so they couldn't evolve. Taichi, Agumon, and Patamon continue to run and meet up with Tailmon who leads them into a cave where they hide from the Digimon. Taichi uses a D-Terminal to send a distress e-mail to Koushirou.

At the school, Miyako sees the e-mail sent to Koushirou and reads it herself. Seeing that the sender had the same family name as Hikari, Miyako printed the e-mail to show it to her.

Takeru and Hikari are talking as they prepare to leave school. Daisuke runs up to them and demands to know Takeru's relationship with Hikari. Takeru asks what he is talking about, puzzled and tells Daisuke that he's funny, which only gets Daisuke angrier. Miyako interrupts to show Hikari the e-mail. They all head to the computer lab and meet Koushirou on the way. Koushirou asks if he can use the computer lab, and Miyako is honored to let a graduate do so. Koushirou e-mails Taichi back, telling him that Hikari and Takeru were with him. Miyako asks where the Digital World was, and Daisuke said Taichi had said something about it being full of Digimon. Takeru was surprised that Daisuke knew Taichi and Hikari explains that Daisuke and Taichi met in the soccer club. Miyako eagerly asks what a Digimon was but was cut off by Iori who reminded her that she was supposed to fix his family's computer. Miyako and Iori leave the room.

In the cave, Taichi and the Digimon finds the Digimental of Courage. Taichi tries to lift it, but it shoots out three beams when he touches it. In the computer lab, Daisuke asks them to him with them to find Taichi. Takeru explains that it's impossible, no just anyone could go. Daisuke insists that he's going and doesn't care if it's impossible. On cue, the beams from the Digimental fly out of the computer. One of them lands in Daisuke's hands while the other two fly to Miyako and Iori where were down the hallway. Each beam becomes a D-3 Digivice. They each enter the Digital World through the gate of the computer, save for Koushirou who was cut off by Miyako and Iori returning to the lab. Miyako frantically asks him what the light from the room was, but Koushirou plays dumb.

In the Digital World, Daisuke finds that his outfit has changed. The Digimon Kaiser watches them through his monitor and is angered at them "trespassing". Daisuke comments that the Digital World didn't seem so different from the real world. He spots a vending machine in the forest, which he found quite confusion. A group of Numemon come out of it, scaring Daisuke, which Takeru and Hikari find humorous.

Daisuke asks if those were Digimon. Hikari explains that they were one kind and that there were some a lot cuter. Takeru adds that there were some a lot scarier. They meet up with Taichi, Patamon, Agumon and Tailmon. Takeru and Patamon are overjoyed to see each other. Daisuke exclaims that he's glad Taichi isn't hurt. Taichi is surprised that Daisuke is in the Digital World. Hikari is shocked to see that Tailmon no longer had her Holy Ring. Tailmon explains that the Digimon Kaiser has been brainwashing Digimon. Takeru is surprised that there is another human besides them in the Digital World. Tailmon explains that the Digimon Kaiser has a Digivice unlike the ones she's seen. Daisuke shows her his Digivice, and she exclaims that's what the Kaiser's Digivice looks like. Taichi realizes that Daisuke must be a new Chosen Child.

Back in the real world, Miyako interrogates Koushirou about where the others went. Koushirou insists that they went home, but she remains unconvinced and demands to know where the Digital World is and what Digimon are. She shows him her Digivice.

Tailmon says that because of the Digimon Kaiser's Digivice that Digimon can't evolve. She also explains that with the loss of her Holy Ring that her power is cut in half. An Evil Ring sneaks into the cave, allowing the Digimon Kaiser to spy on them. Hikari becomes upset about hearing the Digimon Kaiser's deeds. The Digimon Kaiser laughs at hearing her saying that it is all a game. He dispatches Monochromon to attack them. Back in the cave, Taichi shows the others the Digimental he found that had the symbol of courage on it. He said it was too heavy to lift. Takeru and Hikari try, but are unable to budge it. Daisuke then tries, but finds that it was so light to him that he fell backwards. V-mon is released and greets Daisuke cheerfully. V-mon said he had been waiting a long time for Daisuke.

Monochromon breaks into the cave. Agumon and Patamon attack with Baby Flame and Air Shot but fail to do any damage. They all run when Monochromon fires Volcano Strike. As they run, V-mon tells Daisuke to use his courage, but Daisuke doesn't understand. Monochromon fires Volcano Strike at Daisuke, but V-mon narrowly pushes him out of the way. The blast knocks Hikari over, hurting her ankle. V-mon tells Daisuke to say "Digimental Up". Monochromon charges Hikari and Daisuke pulls his goggles off and yells "Digimental Up", Armor Evolving V-mon to Fladramon. Fladramon kicks Monochromon down to end his charge. The Digimon Kaiser is surprised to see that they could evolve, but doesn't seem to worried. Monochromon charges Fladramon, but Fladramon is able to pick him up and slam him into the ground. Monochromon fires more Volcano Strike but Fladramon swats them all away and charges it, but Monochromon headbutts Fladramon into the air. Fladramon then uses his Fire Rocket attacks. On Tailmon's instruction, he destroys the Evil Ring, freeing Monochromon of the Digimon Kaiser's control. Fladramon devolved to V-mon and Daisuke gains a D-Terminal. Hikari, somehow healed of her ankle wound, pets Monochromon asking if it was alright.

Hikari and Takeru remake over how a normally docile Digimon became ferocious under the Digimon Kaiser's control. Taichi says armor evolution is cool, and Agumon says he can leave beating the Digimon Kaiser to V-mon. Taichi tells Daisuke that he is a new Chosen Child, so he'll leave the protection of the Digital World to him, and gives Daisuke his goggles since Daisuke's had been damaged in the fight. They return to the real world, landing on Miyako, Iori and Koushirou in the process. 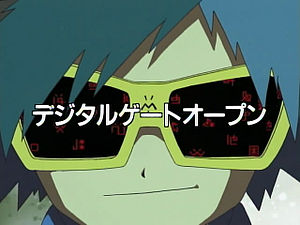