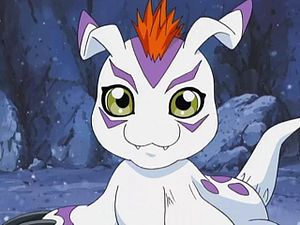 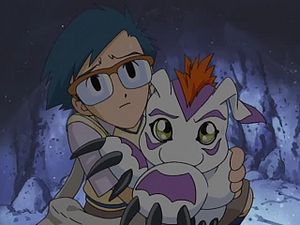 Gomamon with Jo from Digimon Adventure

Gomamon is the partner of Chosen Child Kido Jo. He is reliable, takes life very easily, and he tends to meddle in any affair he comes across.

In Digimon Adventure - Episode 09, he evolved into Ikkakumon for the first time to protect Jo and the others from a Unimon (who had a Black Gear in its back).

Later, in Digimon Adventure - Episode 36, Jo unlocked his crest power by saving Takeru from a rampaging Mega Seadramon while they were travelling across the harbor to find the others. The resulting power allowed Gomamon to reach his Perfect stage in the form of Zudomon, who proceeded to destroy Mega Seadramon. 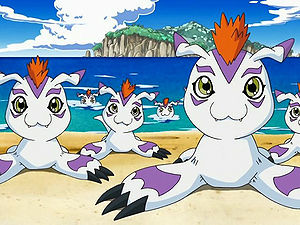 The Gomamon from Digimon Frontier

A group of Gomamon were separated from their Gomamon friends on Goma Island by whirlpools. When Izumi found her Beast Spirit of Wind, the whirlpools disappeared.

While on an expedition to search for Ikuto, Daimon Suguru takes photographs of a group of Gomamon. After being angered during the fight with Lynxmon, one of the group evolves into Ikkakumon and proceeds to attack the team.

Gon was a Gomamon who lived in the Net Ocean. He often swims in the ocean, despite the fact that the evil Marine Devimon surfaced to attack anyone who attempted to swim near the Tag of Sea. But Gon took the risk to keep in contact with Whamon, the Net Ocean Protector, and keep him up to date on activities. Gon later evolved to Ikkakumon and inherited the position of Net Ocean Protector from Whamon.

A Gomamon is shown as a wounded inhabitant of the destroyed Light City.[63]

Several Gomamon are some of the Digimon who cheer the heroes on in the final fight against N.E.O[64].

Gomamon is the partner of Kido Jo. Gomamon helps the Chosen Children solve the problem in Odaiba playing the role of the White Tiger, Baihumon of the Four Holy Beasts.

Despite not being in the game, Gomamon is included on the PAL cover art.

Gomamon is an obtainable Blue Card.

Gomamon is a collectable blue card with 2/3 stats.

Gomamon is a playable character. He can evolves in Ikkakumon, who evolves further in Zudomon.

Gomamon is an unlockable fighter. His main evolution is Plesiomon, and his Super Evolution is Aegisdramon. It can also be obtained as a collectible DigiCard.