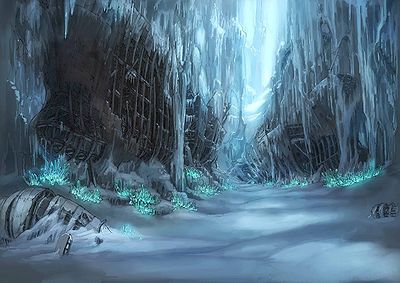 Powdery Cliff (パウダリークリフ Paudarī Kurifu) is an icy location on the northern portion of File Island, where Freezeland once was.

Powdery Cliff is a place completely filled with snow and ice. It looks like a magical world, but it is rejected by all living creatures due to its ruthless scenery. The area shows signs of eroded structures covered in ice, which may have been the remnants of a temple. There are many wrecked ships as well, forming passageways and crevasses. Powdery Cliff leads to Binary Castle towards the west through a path blocked by a wall of ice, and Night Canyon towards the south.