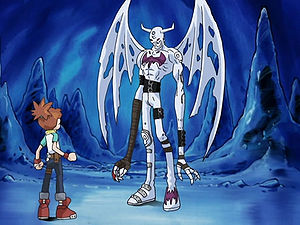 The mass-murdering Ice Devimon appeared in the Real World to make Ruki his partner. He was destroyed by Guilmon. 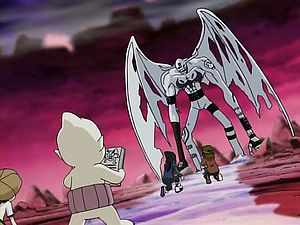 Ice Devimon was imprisoned for his mass-murdering of Digimon, but was accidentally freed by the Chosen Children. It was Kaiser Leomon who defeated him.

Ice Devimon is a rather incompetent general in charge of the Bagra Empire's Lake Zone army which consists mostly of wintery digimon. After too many failures, Lilithmon decides to replace him with Daipenmon. Like several other Bagra generals, he has the ability to absorb other Digimon to enhance himself.

Ice Devimon is an obtainable Adult-level, Blue/Water card, whose stats are:

Ice Devimon is a collectable blue card with 14/12 stats.

Can be evolved from Gizamon if level 25 and Darkness exp 350.

Ice Devimon is an unobtainable enemy Digimon. It is only obtainable as a collectible card. Its card is part of the Hell Devils (ヘルデビルズ Heru Debiruzu) set.