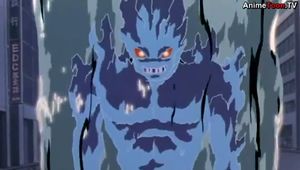 Blue Meramon from The Adventurers' Battle.

When a computer virus causes the system controlling the water flow in Tokyo to override, several sewer pipes blow open. By that, a Blue Meramon comes out of one of the sewers and Renamon fights it.

A random enemy in Amaterasu's Boot Mountain, and can be defeated by fighting Fire Knight.

Blue Meramon is an obtainable Digimon which is evolved from Devimon, Growmon, or Meramon, and cannot evolve. It can also be obtained as a collectible card. Its card is part of the Twin Flame (ツインフレイム Tsuin Fureimu) set.

Blue Meramon is an enemy Digimon in the Tactimon challenge[29].