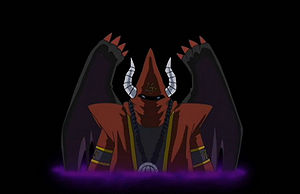 Shortly after battling Digimon around the globe, Demon sends his servants Skull Satamon and Lady Devimon to find Ken. Once they do so, he then orders them and Marin Devimon to attack the city the next day.

Demon then reveals himself and demands that Ken give him the dark seed of Millenniumon in his neck. Ken refuses and Archnemon and Mummymon appear and Ken is convinced to go with them after seeing all the kidnapped children. Daisuke and Wormmon follow on Lighdramon while Silphymon engages Lady Devimon and Shakkoumon engages Marin Devimon. After their opponents are destroyed, they then go to where the truck is heading as Demon himself decides to intervene. V-mon and Wormmon evolve to XV-mon and Stingmon but to no avail.

After becoming Paildramon they are still no match. The other two Digimon arrive and they begin to battle but when Demon begins to attack the civilian bystanders Paildramon evolves to Imperialdramon then to his Fighter Mode. However they still can't win. Miyako suggests sending him through a digital gate but Demon shows that not only can he materialize from one point to another but he can open dimensional gate ways when he proceeds to rip open a rift in the sky to the digital world.

They then come up with the idea of banishing him to the World of Darkness. Ken then taps into the dark power within him to open a portal, but Ken's fear of the World of Darkness began to overtake him. The others tell him they are his friends who will always love him for who he is and support him and Daisuke then tells him that he isn't the Digimon Kaiser and that he has nothing to fear. Ken is able to overcome the upset to open a portal from within the one Demon tore open. 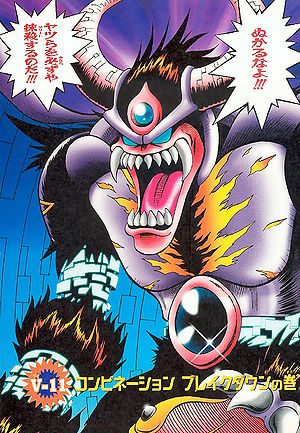 Demon from Digimon Adventure V-Tamer 01
The Digimon then power up their strongest blasts and send him inside and the gate closes trapping Demon inside. Though Demon insists that they will regret this and is actually laughing as he is banished.

After the Mysterious Man's defeat, he wonders if he should try again with Diablomon and Demon.

Demon is the main villain of the Digimon manga V-Tamer 01. He seeks to overthrow Lord Holy Angemon and become ruler of the Digital World. Neo Saiba and his Alias 3 aided Demon in his conquest until Yagami Taichi and Zeromaru defeated them all. Although neither in the manga or any related media is mentioned, the Demon that appears in this manga has much in common with the member of the Seven Great Demon Lords, including the background.

Demon evolves from Skull Satamon by Card Evolution. Furthermore, appears as an enemy Digimon in the 3rd floor of the Dungeon of Darkness. Demon: Beast Mode is also available as a card evolution.

Two types of Demon are found. One can be evolved from Mummymon if above level 47 and Spirit above 230, or can be found at Lava River. Another, uncloaked version appears as a member of the Seven Great Demon Lords. This type of Demon cannot be obtainable or evolved from any Digimon. 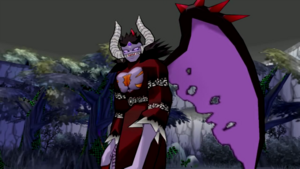 Demon from Digimon Savers: Another Mission

He is a boss and an obtainable evolution for Agumon.

Demon is a Mercenary Digimon which can evolve from Neo Devimon at level 41.
Demon: Beast Mode is an available Burst Mode Evolution for Demon.
It can be unlocked if level 70 or above with the item Furious Claw.

Demon is only obtainable as a collectible card. Its card is part of the Seven Great Demon Lords (七大魔王 Nanadaimaou) set.

Demon evolves from Devimon and can evolve to Demon: Beast Mode.

Obtainable by Jogressing Lady Devimon or Fantomon with a compatible Digimon.