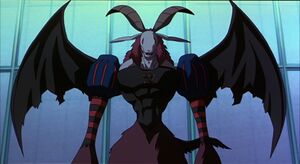 Mephismon from The Adventurers' Battle

Mephismon was formed from the remains of an Apocalymon. He was chased by an Omegamon and fled to the Tamers universe. There he assumed the appearance of the president of V Pets Laboratories and used the V Pets the company produced to spread viruses. The Tamers faced him and at first he had the upper hand but Minami says the keyword to activate the anti-virus program in Labramon. With his viruses defeated Mephismon evolves into Gulfmon to continue the battle.

Mephismon is available as a Digimon Medal.

Mephismon is available as a Digimon Medal.

Mephismon is an unobtainable Leader Digimon.