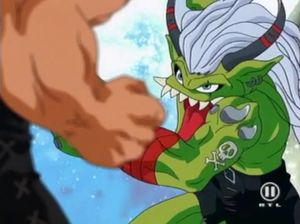 Orgemon was an aggressive Digimon and rival of Leomon. He makes his debut in "Messenger of Darkness, Devimon!". He is first a minion of Devimon, but later joins the Chosen Children against the Dark Masters.

25 years later, another Orgemon is seen with a hurt arm and is being tended to by Kido Jou, who is now the Digital World's first doctor as seen in the epilogue of the series.

Ogremon is seen among a group of Goburimon which pursues Rhythm.

An Orgemon and a Fugamon worked hard to prepare the best ramen over the world in DigiQuartz. In order to get their wish, they worked alongside a human cook, father of a boy named Masaru. When Orgemon and Fugamon got out of control, Tagiru had to hunt them, so they became part of his Collection. Tagiru has used Orgemon in a DigiXros once.

Another Tamer-owned Orgemon appears as part of the audience of the Battle Stage.[61]

In "Before the World Ends", Orgemon finds the Tags in a cave and refuses to deliver them to Tailmon and Wizarmon. After the appearance of Leomon, both fight and end up sinking in the ocean.

Orgemon appears as a minor antagonist in the game as well. To see Orgemon for the first time, the Player needs to talk to Yuramon twice, after crossing the invisible bridge in the Great Canyon and Yuramon will warn the Player about a group of bandits lurking around and assaulting passersbies in the Great Canyon. When reaching there, Orgemon and a gang of Agumon and Gabumon will end up attacking the Player, engaging a battle. After defeating the gang, Orgemon will escape into its fortress. When arriving there, the fortress will be full of Agumon and Gabumon guarding the area and will attack the Player if spotted, though they provide an easy battle. After reaching Orgemon in its room, a battle will be engaged and after its defeated, Orgemon will abandon its fortress and escape again. If the player comes back to this area, Nanimon will be found.

In Freezeland an angry Whamon will request the Player's help because Orgemon stole and took away its cave, so the Player has to ferry on Whamon to its cave, where Orgemon, with several Gabumon and a Waru Seadramon await for the Player, into another battle. Once its defeated for the third time, Orgemon will escape again, and Whamon will join the Village of Beginnings.

The last encounter takes place inside the Drill Tunnel, with a third attempt of Orgemon taking territory. The Player will engage into another battle and, after defeated Orgemon will lament itself how he's never been able to defeat the Player and ends up joining the Village of Beginnings and finally ending all sources of his crimes. Orgemon doesn't really do much in the Village other than stacking up Prosperity Points, but it says its patrolling the city and keeping it safe.

Orgemon's Digivolution item is the Spike Club which lets any Child Digimon evolve into Orgemon.

Orgemon has 4 possible evolutions depending on the stats and Care Mistakes made:

Upon contact with the enemy, Orgemon will use its bone club and smash it on the enemy.

Orgemon is an obtainable Digimon. Evolves from Goburimon (0+ DP) and can evolve to Etemon (0+ DP).

Orgemon evolves from Goburimon and can further evolve to Etemon. The Orgemon present in this game is commonly mistaken with Fugamon due to his unusual brown colouration and tiger stripe outfit.

Orgemon appears in the Scheme of the Demon Lords chapter (策謀の魔王篇 Sakubō no Maō-hen) as the minion of Barbamon. It is also an obtainable Digimon which is evolved from Goburimon, Betamon, Gabumon or Tyumon, and can evolve to Digitamamon, Etemon or Waru Monzaemon. It can also be obtained as a collectible card. Its card is part of the The Ogre's Way of Life (鬼の生き様 Oni no Ikizama) set.

Evolves from Patamon or Kunemon. Can evolve to Andromon.

Orgemon is an enemy Digimon.