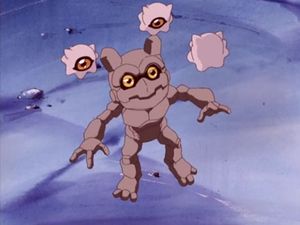 Gottsumon along with Pumpmon were servant of Vamdemon. However, both were rather inept at the whole "evil minion" thing and primarily goofed off. As punishment, Vamdemon killed them both.

A Gotsumon is listed on Himekawa Maki's computer as one of the Digimon that was reborn as a result of the reboot.

Chichos and her partner Gottsumon appears in Menoa Bellucci's Neverland. Another Gottsumon is the partner Digimon of an International Chosen Child.

A Gottsumon (presumably, as the manga is in black and white) owned by a Tamer appears in Tooru's example of how Net Battle works.

An actual Gottsumon appears later in the same chapter as part of the audience of the Battle Stage.[77]

A Gottsumon is one of the Digimon who cheer the heroes on in the final fight against N.E.O[78].

Gottsumon is an enemy digimon that can be found at Mt. Panorama.

Gottsumon is a Child level brown card with 2/3 stats.

Can be found at Training Mountain. Can evolve to Airdramon if above level 11 and Dragon EXP above 100, Minotaurmon if above level 28, or Icemon if above level 35. It also gives you a request mission to obtain a Fancy Shirt from a boy named Masahiko, whose at the shop in DigiCentral. There are also two Gottsumon appear at Pucket Lagoon, who needs help to bring their homeland from the Gekomon and Tonosamagekomon.

Appears as an enemy.