Stingmon and Garurumon destroy a Dark Tower in Mexico, causing several people in a nearby apartment complex in Acapulco to panic. Ken tells Yamato that the Digimon they were chasing fled to the Mayan ruins in Palenque. Ken stated that the Mexican Chosen Children can't help them because of the curfew laws in Mexico. Ken and Yamato try to enter the Mayan ruins, but a security guard stops them, saying that kids should be asleep that late. When Ken and Yamato protest, the guard threatens them with a gun. Ken speaks in Spanish, saying that they would go back home. They retreat back, and Wormmon asked him what language he was speaking. Ken answers, and Wormmon is impressed that he knows another language. Jose, one of Gennai's copies, appears and distracts the security guards while Yamato, Ken, Wormmon, and Gabumon sneak in. Wormmon becomes frightened by a statue's face on the wall and grabs onto Ken. Wormmon is embarrassed by being afraid and attaches two candles to his head under a band to light the way. Gabumon says that Wormmon is scarier than the darkness or ghosts. Yamato tells Gabumon to stop trying to stop his own amusement. They continue to search the ruins, and Wormmon comes face to face with a Gottsumon scaring both of them. Chichos, a Mexican Chosen Child, appears, saying that Gottsumon was her partner Digimon and that she was able to sneak out of her house to help in Spanish. Ken translates what she said to the others. Ken does the introductions and Chichos makes to attempt to hide her affections for Ken, much to Wormmon's distaste as he became jealous of the attention she was giving to Ken. Wormmon mispronounces her name as Tacos to her annoyance, and she retaliates by calling him a pest in Spanish, but he couldn't understand it. Yamato gets them back on track by reminding them of the wild Digimon. Further down the pathway, Jose leaps out in front of them telling them where the wild Digimon were frightening Wormmon, which Chichos teased him about. Gottsumon apologized for her behavior. Chichos asks Ken if he had a girlfriend and asks him what kind of girls he liked and what he thought of her, while Ken just remained silent. Jose translated it for the others. Gabumon commented that she was very forward. They meet up with a Dokugumon and Minotaurmon. Ken states that they can't fight in the ruins because it is a landmark. Yamato and Gabumon attract their attention and lead them outside. Chichos trips on the way out, and Ken offers to let her ride on his back. Seeing this, Wormmon intentionally trips and leaps towards what he thinks is Ken, but turns out to be Gottsumon whose rock body proves to be more painful than the fall. Minotaurmon starts to attack the ruins. Ken evolves Wormmon to Stingmon who pushes Minotaurmon away from the ruins. Minotaurmon and Dokugumon start to rampage, knocking over several trees. Yamato and Chichos evolve Gabumon and Gottsumon into Were Garurumon and Monochromon. They beat the two easily and return them to the Digital World. Chichos had fallen asleep from the exhaustion and says that Stingmon is wonderful in her sleep in Spanish. Wormmon thinks she is insulting him, but Ken translates it, causing Wormmon to blush. They take Chichos back home, where her parents find her. Wormmon asks Ken how to say goodbye in Spanish, so he can whisper it to her.

In Moscow, a swarm of wild Flymon flew through the sky. Sora and Miyako arrived on Aquilamon and Garudamon and destroyed a Dark Tower in the area. They then met up with three Russian Chosen Children, Anna, Lara, and Yuri along with their Digimon partners. They run into a problem because of the language barrier. Sora says the only Russian words she knows are piroshki and borscht. Miyako then gets the idea of using Russian food names to communicate actions and gets them to understand with some body language. They take to the air and knock down dozens of Flymon and return them to the Digital World. The three Russian Chosen Children offer to feed Miyako and Sora who had become hungry from yelling food names, but Ilya, a copy of Gennai, arrives and says there is a crisis in Siberia. They head there to find two other Russian Chosen Children trying to hold off rampaging Mammon. The cold winds start to take its toll on the two. An attack from the Mammon causes Sora to fall off of Garudamon. Aquilamon catches her and puts her gently on the ground. The Mammon tries to trample the two, but Imperialdramon arrives and knocks them over, allowing them to be returned to the Digital World. Ilya thanks Sora and Miyako before vanishing. The others who arrived on Imperialdramon say they need to head back to Japan because it would be past five o'clock in the morning already there, and they still had to pick up Yagami Hikari and Koushirou from Hong Kong. Sora and Miyako and thier Digimon start crying because they never got any Russian food. Meanwhile, in a military lab, technicians find that all information on the Digimon that had appeared had vanished. Gennai closes his laptop, having finished his work. Elsewhere, throughout the world Mimi's family prepared her an oversized cake, while the Hoi Brothers think of Hikari, Chichos sleeps dreaming of Ken and Stingmon, Anna, Lara, and Yuri enjoy a meal, as do Dingo and Ganimon. Michel, Catherine, and Floramon have a drink together. But back in Japan, Archnemon makes contact with a boy. 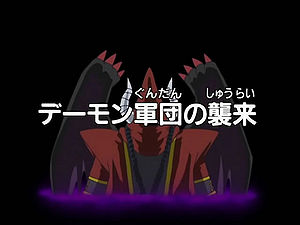