Jou, Iori, Ikkakumon, and Digmon are demolishing Dark Towers in Australia. On the Golden Coast, Jou complains that it is hot during Christmas in Australia. Iori comments that it is summer in the Southern Hemisphere. What appears to be Santa in a swimsuit appears and helps them pull down the last Dark Tower. Santa then reveals himself to be Eucalyptus, one of Gennai's copies. They then hear someone calling for help from the ocean. They see Dingo, an Australian Chosen Child and his Ganimon surfing towards shore while being chased by a Gesomon, Shellmon, and Ebidramon. Jou then gets the idea of calling out several seafood names to threaten the three Digimon, causing them to become scared and flee. They chase the three towards the Great Barrier Reef, but spot a Dark Tower on an Island and move in to destroy it, but Anomalocarimon ambushes them. Jou Super Evolves Ikkakumon into Zudomon and fights with him, but Anomalocarimon still overpowers him.

The battle damages the Great Barrier Reef. Out of concern for it, Jou instructs Zudomon to take the fight deeper into the ocean. Iori and Dingo evolves Armadimon and Ganimon into Submarimon and Coelamon to join the fight. Coelamon distracts Anomalocarimon, allowing Zudomon to strike him on the head with Hammer Spark attack followed by Submarimon blasting him with his Oxygen Homing attack rendering Anomalocarimon unconscious. Coelamon then uses his Variable Darts attack to destroy the Dark Tower. Other Australian Chosen Children arrive herding wild Digimon to Sydney. Iori opens the Digital Gate and sends them back to the Digital World.

In Paris, Taichi, Takeru and their Digimon partners wait for Michel, Takeru's grandfather, to arrive at the Arc de Triomphe to help them while realizing that Christmas was much colder in France. Michel arrives on a motorbike with a sidecar. Takeru inquired as to what his grandmother was doing, and Michel replied that she had drunken too much wine at a party and fell asleep. He stops at the Palace of Versailles when he saw that the gate was help open and the lights were on. Agumon suggests that they might be having a Christmas party, but Michel was insulted by the notion that someone would have a party at the palace. Takeru emphasizes that they need to destroy the Dark Tower, but Micheal says that as a good citizen of Paris, he couldn't ignore the situation.

Inside the palace they find Mamemon, Big Mamemon, and Metal Mamemon partying and drunk on wine. On further inspection they spot Catherine, a French Chosen Child, whom Taichi and Takeru take an immediate liking to, and her partner Floramon, whom Agumon and Patamon take an immediate liking too, both tied up by the three Digimon intruders. Micheal boldly walks up to the Mamemon brothers and told them it was inexcusable to occupy the palace. He declared himself a knight who had come to rescue Catherine, which impressed Catherine greatly. Mamemon threw a pie at Michel. Taichi and Takeru ran up but were hit by pies also. Agumon and Patamon evolved into Greymon and Angemon. The Mamemon brothers break through the palace wall to take the fight outside with Greymon and Angemon in pursuit with Michel shouting at them not to damage the palace. Angemon blasts Mamemon and Metal Mamemon with his Heaven's Knuckle attack. Big Mamemon punches Greymon repeatedly but Greymon lifts him and throws him then blasts him with Mega Flame sending him flying into a pool of water. Metal Mamemon fires on Angemon but misses, causing what appears to be fireworks in the sky. Inside, Michel, Taichi and Takeru early ask Catherine if she is okay and how she was captured. She explains she and Floramon were trying to destroy a Dark Tower that had appeared in the Seine when she was ambushed by a Digimon.

They realize there must be others to lose Digimon in France also, as if on cue, Giromon, who had ambushed Catherine, arrived and fought with Angemon allowing Metal Mamemon to shoot him in the back. Mamemon distracted Greymon allowing Giromon to hit him with his Deadly Bomb attack them Big Mamemon used his Big Smiley Bomber on both of them. Realizing that the situating was becoming critical, Taichi, Takeru, and Catherine evolved Greymon, Angemon, and Floramon into Metal Greymon, Holy Angemon, and Kiwimon. Holy Angemon swatted Giromon and Metal Mamemon away with his sword. Big Mamemon attacked Metal Greymon with Big Smiley Bomber but it had no effect. Metal Greymon knocked Big Mamemon away with his Booster Claw. Kiwimon knocked Mamemon out of the sky with Little Pecker. Overpowered, the four began to flee. Taichi instructed them to chase them to the Dark Tower at the Seine. There, Metal Greymon blasts all four of them down with Giga Destroyer rendering them unconscious while Holy Angemon destroys the Dark Tower. Several other French Chosen Children arrive leading wild Digimon, so they could be returned to the Digital World. Taichi and Takeru kiss Catherine on both cheeks, then Michel kisses her on the hand, saying Merry Christmas in French (Joyeux Noël). Floramon blows kisses to Agumon and Patamon. In Japan, a girl talks with her friends about how they failed a test. As she starts to walk home, she comes across Archnemon and feels that she might understand her. 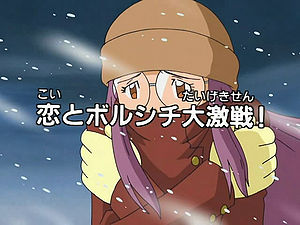