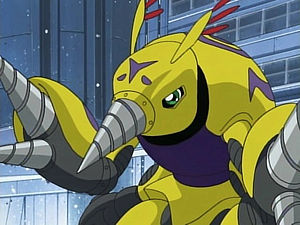 Digmon is the partner of Hida Iori and the armor evolution of Armadimon, evolving using the Digimental of Knowledge.

In "Rush into the Digital World! Drimogemon's Trap", an aggressive Drimogemon "slide evolves" into Digmon when cornered by Daimon Masaru and Thoma H. Norstein at the end of a lengthy chase between worlds, and is eventually defeated through the combined attacks of GeoGreymon and Gaogamon.

With regard to this Digmon's evolution, no Digimental was shown, so it cannot be qualified as an "armor" evolution, nor does it count as a regular evolution due to the fact that both Drimogemon and Digmon are classified as Adult-level Digimon.

A Digmon appears as a Tamer's Digimon during Tatsuno Tsurugi's first log-in into Net Battle.[18]

A Digmon is one of the Digimon who cheer the heroes on in the final fight against N.E.O[19].

Digmon is the last opponent in Igloo City's first Extra Arena , the second of the second, and the first of the third. Before the first match, he threatens to destroy the player's Online Deck. Digmon plays the Mountain Crusher Deluxe deck, a Yellow/Rare deck with 1 attack, 5 defense and 2 evolution speed, that uses hand and deck discard cards and Recovery cards.

Digmon is also an obtainable Armor-level Yellow/Rare card. Like the other Armor levels in the game, it can't be put in a deck, and must be Armor Evolved from Armadimon in-battle. Digmon's stats at level 1 with no Digi-Parts are:

Using the Digimental of Knowledge, the player can call upon Digmon to help them travel the Underground Circuit Board under the networks, allowing quick (sometimes) access between different areas and even the two Servers.

It can be evolved from Drimogemon at level 11. Furthermore, it can be obtained by evolving Armadimon (Jogress Line) through the Digimental of Knowledge at level 35.

Digmon is only obtainable as a collectible card. Its card is part of the Digimental of Knowledge (知識のデジメンタル Chishiki no Dejimentaru) set.

Digmon is available as a Digimon Medal.

Digmon is available as a Digimon Medal.