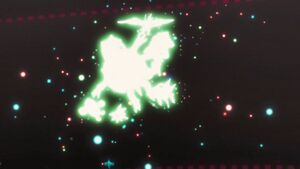 The original incarnations of the partner Digimon fade away as the Reboot occurs.

A Reboot (リブート Ribūto) is a phenomenon in Digimon Adventure tri. in which a world is totally reset, and as a result, time within it is "rewound". Reboots are considered a last resort that are only initiated in the case of an extreme existential threat to the worlds.

For the Digital World, it is Homeostasis who decides to initiate a Reboot.[1]

Reboots have been described as effectively turning back time within the affected world. Because of this, as part of the resetting of the Digital World, Digimon are reborn and, under normal circumstances, lose all of their memories of their pre-Reboot lives and relationships.[1] However, the Reboot does not break a partner Digimon's partnership with their Chosen Child, so although the Digimon will not remember them or any prior experiences anymore, the Chosen Child can work to rebuild their bond with their partner Digimon and, by doing so, regain the ability to make them evolve.[2] The Chosen Children's Digivices are also unaffected, including ones that have been transformed into D-3s.[1]

Under ideal circumstances, a Reboot of the Digital World should not affect anything in the Real World. However, they are not to be initiated lightly, because a careless Reboot may result in "gaps in phases" which risk the Digital World becoming engulfed in the quantum sea.[1]

Under rare and extreme circumstances, where the digital data of the Real World has been overwritten by the grammar of the Digital World, it is also possible for Homeostasis to initiate a Reboot of the Real World. One anticipated consequence of this is total reversion of the Real World's digital technology to its original state, which is forecast to have devastating consequences upon many services and utilities that are critical to day-to-day life, causing immeasuable damage.[3]

When a Reboot is initiated, a red screen with a timer counting down to the moment that the Reboot will occur appears on computer screens.[1][3]

During her time in university, former Chosen Child Himekawa Maki learns of the concept of the Reboot. It occurs to her that she could use the Reboot to reunite with her lost partner Digimon, Bakumon, although at the time she does not have the resources to act upon any of this information.[2]

In 2005, Homeostasis determines that the continued existence of infected Digimon is a critical threat to the continuity of the quantized world. Since infected Digimon did not exist in the beginning of the Digital World, it concludes that a Reboot of the Digital World is the only way to purge itself of them for good, and decides that the next time the rampaging Meicoomon appears, the Reboot will be initiated. It possesses Yagami Hikari to share its decision with the eight partner Digimon of the Chosen Children, while Himekawa fills them in on the remaining details. Himekawa is of the opinion that as long as there are no remaining traces of infection at all left in the Real World at the time of the Reboot, then the procedure will have no effect on the Real World itself.[1]

Of the partner Digimon, only Agumon and Tentomon share what they have learned about the Reboot with their human partners. They are all horrified by the idea of having their memories reset, and come up with a plan to prevent the need for a Reboot by capturing Meicoomon first. However, the plan fails completely when not only does Meicoomon mutate into Meicrackmon: Vicious Mode and elude capture, but the partner Digimon themselves are overtaken by the infection, and the Reboot countdown is initiated. Izumi Kōshirō's contingency plan to save the partner Digimon from infection and the Reboot with a "backup field" of his own creation also fails when they are unable to capture any of the partner Digimon in the field. As a last resort, Tentomon Ultimate Evolves into Herakle Kabuterimon and sacrifices himself to ensure that Meicrackmon and the infected partner Digimon are all kept out of the Real World at the moment of the Reboot, to prevent there being any lingering traces of the infection in the Real World post-Reboot.[1]

As it turns out, Himekawa ultimately did play a role in the Reboot coming to pass. Due to her position in the National Data Processing Bureau, she had extensive experience working on Meicoomon's case and was familiar with both her and her partner, Mochizuki Meiko.[4] She had corresponded via email with the Mysterious Man, who proposed using Meicoomon to cause a Reboot and offered her information in exchange for cooperation with Yggdrasill. Her codename for this plan was "Project R," as seen on a secret document that Nishijima Daigo eventually finds. After the Reboot occurs, Himekawa uses "Digitalworld Positioning System" software to pinpoint the locations of various Digimon in the post-Reboot Digital World,[N 1] including Bakumon. She travels to the Digital World to reunite with Bakumon, but Bakumon is suspicious of her and outright rejects her heavy-handed attempts to rekindle their bond.[2] Her failure breaks her and sends her on a downward spiral that ultimately leads to her death.[4]

According to the Mysterious Man, Yggdrasill's intentions for the Reboot were to overcome the one limitation on the endless life cycle of Digimon: Digimon who die in the Real World are not able to be reborn as Digitamas. If a Reboot occurs, however, any Digimon who previously died in the Real World are reborn, so Yggdrasill's plan is to use those reborn Digimon as a force to conquer and destroy the Real World, along with Meicoomon, who they aim to provoke into mutating so that they can exploit her power.[2]

When the Chosen Children enter the post-Reboot Digital World to find their partner Digimon, they find that as intended, their memories have been wiped, as have those of almost every other Digimon, such as Elecmon. However, there is one exception: when they find Meicoomon, she still remembers Meiko. (As it is later discovered, the post-Reboot Meicoomon actually has the pre-Reboot memory data of every Digimon saved inside her, causing both her abnormally high data size and her immense power.[3]) They work to restore their friendships with their partner Digimon, as well as help reunite Meiko and Meicoomon. Yagami Hikari reflects that while their partner Digimon have lost a lot in the Reboot, there are some positives as, for instance, Plotmon no longer has the trauma from her experiences with Vamdemon and is happier for it. However, Yggdrasill's forces continue to attack them and to try and trigger Meicoomon into mutating and running wild again, at which they succeed.[2]

When Ordinemon is created and enters the Real World, Homeostasis concludes that there is no way to defeat it by conventional means. It also observes that the core grammar system that underpins the Real World, which is normally totally different from that of the Digital World, is being overwritten with that of the Digital World, and it calculates that if the process is allowed to complete, the Real World will be consumed by the quantum sea. As a result, it believes that the only course of action is to initiate a Reboot of the Real World itself, to revert Ordinemon back to its original state and therefore foil Yggdrasill's plans. It sends Hackmon to deliver this news to the Chosen Children. The Reboot countdown is initiated, but after Kōshirō and Meiko unlock the pre-Reboot memories of Digimon from inside Ordinemon, and Hackmon (as JESmon) frees Tailmon from Ordinemon, the Reboot is canceled with 11 seconds to spare.[3]