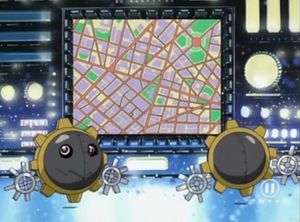 A Hagurumon was seen when Ruki fixed a clock, awakening a Megadramon who proceeded to cause havoc.

A Hagurumon is listed on Himekawa Maki's computer as one of the Digimon that was reborn as a result of the reboot.

A Tamer-owned Hagurumon appears as part of the audience of the Battle Stage.[50]

Several Hagurumon pretending to be Tailmon served under Nanomon (himself pretending to be Angewomon) and operated the hot springs that were actually a trap for Tatsuno Tsurugi, Inui Yuu, Kitajima Ami and their Digimon. They tried to feed computer bugs to everyone, but ultimately were stripped of their will to fight by Ami's Marin Angemon.[51] They later joined the heroes against N.E.O, alongside the rest of the ex-Commandments[52].

Hagurumon appears as an unobtainable Digimon in Digimon World.

Toy Town is a city that used to be ruled by Monzaemon, but soon it went missing and the Town was taken over by Waru Monzaemon, and Hagurumon was one of the victims, who got kidnapped by the Waru Monzaemon. When the Player reaches to Toy Town, the town appears to be isolated, and when entering one of the buildings, the Player will see two Blikmon who will tell the Player about what happened in Toy Town and that Hagurumon got kidnapped, so the Player offers to rescue the town, but the Blikmon refuse to do so unless the Player has a Monzaemon as a Partner, so that it can enter the Toy Mansion.

Once the Player makes its way up the final story of the Toy Mansion, the Player will face Waru Monzaemon, engaging a battle, and once its defeated, it'll release Hagurumon, where the Player picks it and brings it back to the Blikmon, giving back the life to Toy Town, and a lifeless Monzaemon suit will join the Village of Beginnings, upgrading Jijimon's house and residing in a coat hanger.

Since Hagurumon is treated as an item in the game, the Player needs to be careful when engaging a battle, in case the Player loses a Battle, and as consequent the items, where Hagurumon may be one of them. If done so, the Player must go to the Secret Item Shop in the Gear Savannah where the merchants will sell back the items the Player has lost.