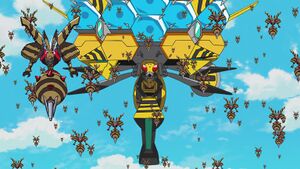 A group of Waspmon chaired by Cannonbeemon in Digimon Adventure:.

Waspmon is one of the Commandments. It takes care of i-LAND, a settlement where Digitama can be born, as they are to be part of Barbamon's new world. It originally pretends to be an ally of the heroes, only to later turn against them after luring Tatsuno Tsurugi and Inui Yuu into a trap. It then atacked Agumon and Gaomon, before evolving into Cannonbeemon.[12]

The remaining Waspmon of the Commandments later joined the heroes' side for the final battle against N.E.O[17].