Toy Town (おもちゃのまち Omocha no Machi, おもちゃの町 Omacha no Machi, トイタウン Toi Taun) is a city made of toy blocks within the Misty Trees on File Island. 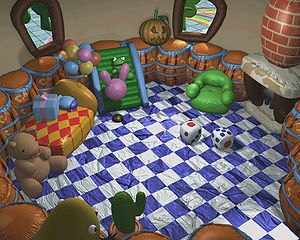 The inside of the Puppet House 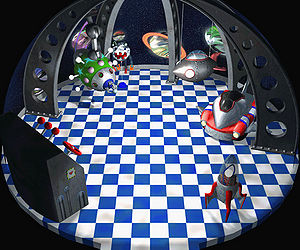 The inside of the Robot House 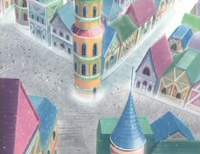 First appeared in "Palmon, Raging Evolution!". Under the influence of the Black Gears, Monzaemon kidnaps all of the Chosen Children, except for Mimi and Palmon, and takes them to Toy Town (おもちゃの町 Omocha no Machi), a village of toys forgotten by children. There, the Digimon are locked in a chest and the children are brain-washed into playing with the toys. Mimi and her partner Palmon reach the village and save the others as Palmon evolves to Togemon for the first time.

First appeared in "Town Floating in the Sky! Toy Agumon's Toy Town", Toy Town (トイタウン Toi Taun) is a floating island populated by toys, candy, and carnival rides. Takuya, Kouji, and Tomoki fall onto the island after Karatuki Numemon Mountain was scanned by Gigasmon. They are greeted by Monzaemon who wants to wrestle with them but they flee. The virus Toy Agumon who controlled the island order Monzaemon to battle the Chosen Children, but he hesitates. Angered, the Toy Agumon change him into Waru Monzaemon. Waru Monzaemon captures Tomoki and takes him to a pink castle on the island. Takuya and Kouji pursue them and are met by Pandamon who showed them a way into the castle and explained that Cherubimon had corrupted the hearts of the Toy Agumon. Takuya and Kouji fight the Toy Agumon, purifying them back into normal Toy Agumon, and then make it to where Tomoki was to find that Tomoki had already helped Monzeamon change back to normal. 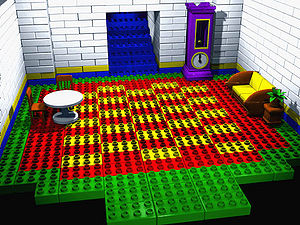 The entrance of the Toy Mansion 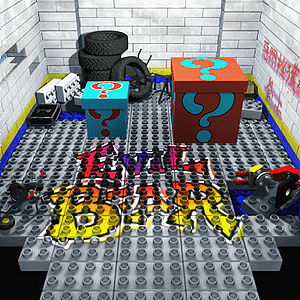 The last room of the Toy Mansion

Toy Town (おもちゃのまち Omocha no Machi) is located on the northern-most reaches of File Island, just beyond the Misty Trees. Recently, the usually cheerful town has gone eerily silent, and most of its inhabitants have vanished. A lone Blikmon occupies the Robot House and is greatly distressed. The town's guardian, Monzaemon, is nowhere to be found and a bully named Waru Monzaemon has stolen away a friend of Blikmon's, Hagurumon.

If the Player returns with a Monzaemon for a partner, Blikmon will open the door to Waru Monzaemon's lair. After several floors containing Toy Agumon and Tankmon, the Player will reach a room with two wrapped packages. The smaller one contains Waru Monzaemon, who will attack. After the battle, he leaves behind a gear. It is worth noting that the battle with Waru Monzaemon may be the only chance in the game to learn the Thunder Justice technique. If the gear is taken to Blikmon, it is revealed to be Hagurumon. If you then visit the room where you battled Waru Monzaemon again, you will find that it is one of the five locations that the wandering Nanimon goes to.

Sitting on the green chair in the Puppet House is a large Monzaemon suit, apparently lifeless. If the Player brings a Numemon and talks to the suit, Numemon will slip into it and evolve into Monzaemon. This is a good way to "raise" a Monzaemon for the Waru Monzaemon quest, or at least an easy way to raise a perfect level digimon. After Waru Monzaemon is defeated, if the player returns to the Puppet House, the suit will come to life and bound off to the city, where it hangs on a wall in Jijimon's House. Unfortunately, once inside the city, it can not be used for evolution.

First appeared in the episode "Palmon, Raging Evolution!" (パルモン怒りの進化！ Parumon Ikari no Shinka!), Mimi arrives to Toy Town in search of her separated friends, only to find them in states of false happiness.