Cherubimon is one of the Three Archangels and one of the primary antagonists in Digimon Frontier.

Cherubimon was one of the Three Archangels who was responsible, along with Seraphimon and Ofanimon, to take care of the Digital World, more specifically of the Beast Tribe, after the defeat of Lucemon. He was also responsible for keeping the Legendary Spirits of Earth, Water, Wood, Steel, and Darkness.

Cherubimon was in constant disagreement with Seraphimon and Ofanimon, because of their manner of governing, until he saw them gathering in secret. Ofanimon just wanted to talk to Seraphimon about him to try to understand his ideals, but Cherubimon got it wrong, and sat down betrayed, filling his heart with darkness. Lucemon took advantage of the situation and corrupted Cherubimon, turning him into Cherubimon (Vice), and used it to get DigiCode to reborn. Cherubimon, along with the Beast Tribe, attacked and locked Seraphimon unconscious in a castle, while abducted Ofanimon. After the fight, he wandered the Digital World searching for strong Digimon capable to acquire the Legendary Spirits, but couldn't find any Digimon capable of enduring the Corrupted Spirit of Darkness, until meet Kimura Kouichi in the human world.

After an accident that nearly killed Kouichi, Cherubimon drew his spirit to the Digital World and persuaded him to fight by his side. Cherubimon appeared periodically during the events of the first anime arc, only to give order to the Evil Warriors and talk to Kouichi (in the form of Duskmon). It is revealed that he locked the Corrupted Beast Spirit of Darkness to use only in the necessary moment (against Minamoto Kouji, Kouichi's brother). However, not even the power of the Spirit was enough to stop the Chosen Children.

After Kouichi being defeated and purified, Cherubimon sends a clone to try to convince him to return to his side while the Children travel in a Trailmon searching for Ofanimon. Kouichi didn't accept and got his Dark Spirits purified and defeated Cherubimon's clone without much effort. Cherubimon fought again with the Children in his castle, while they tried to save Ofanimon from the prison of light. Cherubimon was at an advantage as he was able to take the Children's Digivices, but Ofanimon managed to trick him and get them back. Annoyed, Cherubimon catches a brief fight with Ofanimon, eventually killing her, but the Children discover that she has managed to improve Takuya and Kouji's Digivices. So, they fuse the power of 5 Spirits, each one to evolve in Kaiser Greymon and Magna Garurumon. After a difficult fight, Cherubimon is purified and scanned. His pure form is seen briefly crying by seeing Seraphimon and Ofanimon in the sky awaiting him before disappearing. 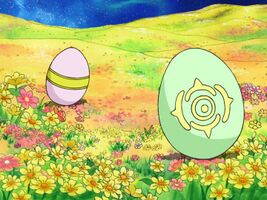 Cherubimon later briefly reborn as Chocomon before evolving to Lopmon at the same time that Ofanimon reborn as Plotmon. Since then, he has been accompanying the children along with Patamon and Plotmon during the fights with the Royal Knights and Lucemon.

During the events of the game, shortly before the events of episode 1 of the anime Digimon Frontier, Cherubimon still can't found Digimon to acquire the Legendary Spirits and become the Evil Warriors, so he uses the Four Holy Beasts as his subordinates (he got it by being the host of Beast Tribe). But they are defeated and sealed by the Player.

Cherubimon appears as the final boss in the game.