For the toy of the same name, see D-Scanner Toy.

The D-Scanner (ディースキャナ Dīsukyana; Dub: D-Tector) - or D-Scan for short, referred to on-screen as just the Digivice (デジヴァイス Dejivaisu) - is a model of Digivice that is used by the Chosen Children in Digimon Frontier.

The D-Scanner is an oblong device with an ergonomic grip on its right side, with a similar form factor to a late 1990s/early 2000s cellular phone. It is controlled by a set of four buttons (three face, one on the side). Its main feature is the optical scanner that is mounted on its top-right corner. On its back is a clip, so that it can be worn on its user's belt.

While they are in their Hybrid forms, the Chosen Children can still bring out and use their D-Scanners, usually to scan Digicode.[1] Susanoomon has used both Kanbara Takuya and Minamoto Kouji's New D-Scanners together at once.[10] 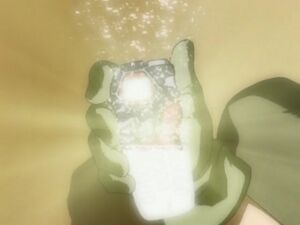 When Kanbara Takuya, Minamoto Kouji, Shibayama Junpei, Orimoto Izumi, and Himi Tomoki enter the Digital World, their cellular phones are transformed into D-Scanners.[1][5] Ofanimon periodically contacts them through their D-Scanners to give them direction on where to go and what to do next. Their D-Scanners help the Chosen Children to locate the Legendary Spirits by alerting them to their presence, and when they find or obtain a Spirit, they are stored within their D-Scanners. They also use their D-Scanners to scan the Digicode of defeated opponents to purify them, and to store the scanned Digicode until they can release it to restore it to its rightful place.[5]

When the Chosen Children arrive at Seraphimon's castle at the Forest Terminal, Ofanimon instructs them to concentrate the light of their Digivices into a focused beam to free Seraphimon from his crystal prison.[8]

A group of Tocanmon who work for Ranamon conspire to steal the Chosen Children's D-Scanners. They achieve this by luring them into a beach resort, then stealing their D-Scanners from their baskets of clothes and belongings while they are swimming. However, they do not manage to steal Izumi's D-Scanner because of how long she had been in the changing room.[11] When they find out, the Chosen Children pursue the Tocanmon to try and get their D-Scanners back, and during this time, Izumi is their only combatant since she is the only one to still have hers. They eventually track the Tocanmon to the Akiba Market, where the Tocanmon had sold the D-Scanners to Nanomon. Initially, Nanomon only wants to tinker with and disassemble the D-Scanners, but after some difficulty with the Tocanmon and Arbormon, Nanomon returns the D-Scanners to Tomoki when it is convinced of his honesty, having also loaded the Beast Spirit of Ice directly onto Tomoki's.[12]

In the Dark Continent, after Ranamon and Mercuremon take Junpei, Izumi, and Tomoki captive, they give their Digivices to another group of Nanomon to experiment with. When Takuya comes to rescue them, he destroys the Nanomon work area and returns the D-Scanners to their owners.[9]

While they are trapped inside Sephirothmon, Seraphimon's Digitama reacts to Takuya and Kouji's respective struggles against Mercuremon and Duskmon and sends beams of light to their D-Scanners that give them the ability to Double Spirit Evolve into Aldamon and Beowolfmon.[2][13]

After his defeat and release from Cherubimon's control, Kimura Kouichi receives a D-Scanner of his own in response to his determination to stand up to Cherubimon and put his history with Kouji behind him. It is created from Kouji's D-Scanner when it releases the purified Spirits of Darkness for him to use.[14][N 1]

In the first phase of the fight between the Chosen Children and Cherubimon at the Rose Morning Star, Cherubimon aims to subdue the Chosen Children so that he can take both their D-Scanners and the Spirits inside them. He succeeds in taking everyone's D-Scanner except Izumi's. Ofanimon intervenes to protect Izumi from Cherubimon's attacks, and then takes the D-Scanners and Spirits back under the pretense of healing Cherubimon of his corruption. With the last of her power before Cherubimon kills her, she evolves Takuya and Kouji's D-Scanners into New D-Scanners, giving them the ability to Hyper Spirit Evolve into Kaiser Greymon and Magna Garurumon.[3]

Shortly after their first defeat of Cherubimon, Takuya and Kouji's D-Scanners are frozen by Ice Devimon, making them unusable and forcing the two to sit out the fight with him. The ice thaws away after Kouichi destroys Ice Devimon and the D-Scanners are back to normal.[15]

All of the time that the Spirits spend traveling with the Chosen Children in their D-Scanners allows them to be reincarnated as the independently existing Warrior Ten. After the defeat of Lucemon, the Chosen Children return to Japan, and on their way back, Löwemon contacts Kouji via his D-Scanner to notify him of Kouichi's condition in hospital in the Real World. Their D-Scanners turn back into their cellular phones at the moment that Kouichi awakens.[6]

When the Old Clock Shop Man brings him into DigiQuartz, Kanbara Takuya still has his New D-Scanner.[16]

When Babamon summons him to help fight Metamormon, Takuya still has his original D-Scanner.[17]

A D-Scanner, alongside a Digivice, D-3, D-Ark, Digivice Burst (incorrectly stated to be the Digivice iC), and Digimon Xros Loader, is displayed on a desk in the real world.

This Digivice is the basis for the D-Scanner line of LCD quest toys, produced for the Japanese market. The main gimmick of the D-Scanners is scanning barcodes to collect Digimon and items.

This Digivice is also the basis for the D-Tector line of LCD quest toys that was produced instead for the American, European, Asian, and Oceanian markets. The D-Tector line is totally different from the D-Scanner line and focuses on a new gimmick of a motion sensor.