The episode begins with Kanbara Takuya running down the road with his cell phone in hand. He passes a little boy and his father, who are kicking a soccer ball back and forth to each other. The father's cell phone rings, and misses the ball. As the ball rolls down the road, Takuya helps out by running over and stopping it. However, after he kicks it away, a truck is seen ready to run him over. The driver is distracted by his cell phone, and doesn't see Takuya until the last second. As the truck struggles to stop, Takuya fearfully asks himself if this was his destiny.

The scene flashes back ten minutes earlier, where Takuya is sitting in his kitchen with his little brother Shinya, playing on the floor, and his mother, talking on the phone with their father. Takuya complains that his life is boring, and a message appears on his cell phone: "Will you start? YES/NO" 「スタート しますか？しませんか？」. Takuya selects YES, out of boredom, and a voice begins talking to him. It says that it is time for him to decide his future. A new message appears, telling Takuya to take the 17:45 train to Shibuya from Jiyūgaoka Station 「自由が丘駅１７：４５発渋谷行きに乗って下さい」. Takuya runs out of the house with his cell phone, hat, and goggles, determined to make the train.

The scene returns to the present time, where Takuya is about to be run over by a truck. He jumps out of the way at the last second, and the truck swerves away to a stop. Takuya gets up and darts down the street. Takuya arrives at Hikarigaoka Station, where the train to Shibuya has arrived at the platform. Although he had no money, a ticket appears from a machine. Takuya excitedly takes it and runs over to the train.

Takuya is leaning against the door of the train, tired of running. His cell phone rings yet again, as do everyone else's. His looks up to see a boy his age, Minamoto Kouji, taking out a cell phone and looking at the screen. Takuya wonders if he also received the message. The mysterious texter now writes that he needs to transfer to the six o'clock subway. Takuya looks at a watch and discovers he has four minutes.

Out of the train, Takuya wonders where to go next. The bandanna-headed boy he saw, Kouji, passes him and walks away. Takuya believes he knows where to go, and follows him. They arrive in the station, and Takuya temporarily cannot find Kouji. He sees him in an elevator, and Takuya jumps in with him. Takuya tries to ask Kouji about the message, but he doesn't respond. They enter the lower level of the station, leaving the two of them in awe.

The elevator stops to a clearing with several trains ready to leave. Kouji runs over to a train, leaving Takuya to wonder in the elevator. The clock strikes six, and we see a little boy, a blond girl, and a large boy all enclosed in the same train. Takuya runs over to the train and jumps on, seeing Kouji watching him from another as they descend into a dark tunnel.

Takuya nervously runs into the second cabin of the train, and sees the three children sitting on the seats. The blond girl, Orimoto Izumi, the older boy, Shibayama Junpei, and the little boy, Himi Tomoki.

Izumi and Junpei tell Takuya that they were in the train because of the cell phone message, but Tomoki, sobbing, tells them he was pushed into the train by some bullies and didn't want to be there. In the middle of the conversation, the lights go out and the train screeches to a halt, sending the four of them tumbling back. Their human spirits are briefly revealed. Their cell phones all change and are now D-Scanners. The voice tells him that they are now in the Digital World.

The train is revealed to be a Trailmon, and strange floating creatures, Pagumon, appear by the windows and freak Izumi out. Takuya makes crazy conclusions that they are ghosts of children who came before them. The train comes to a stop at a strange, station-like building lit with fire, the Flame Terminal.

As the Trailmon leaves, it tells the four children that they would have to get a spirit in order to go home. Tomoki starts crying, and walks along the thin train rails, trying to follow. Takuya, worried about him, reminds him they need to find the spirit. Tomoki turns around, but slips and nearly falls into the bottomless pit below. Takuya promises he will come and save Tomoki, who is now clutching to the rail. However, before he can do anything, the ground is engulfed in an emerald-green flame, and Bokomon and Neamon come running out. They jump on Takuya, and discover he is a human. Before they can strike up a conversation, a growl comes from the flames and a large Digimon appears, Cerberumon. He demands for a spirit, and Takuya, without thinking, exclaims that it is his. Cerberumon attacks them again and Takuya flees. He runs over to the rail Tomoki is hanging from, with Neamon and Bokomon perched on his shoulders. The rail bends, and they slide off the rail into a heap on the ground. Takuya's D-Scanner reacts to one of the fires, and a beam points to a large enclosure of light. The Spirit of Fire appears from within.

Cerberumon is determined to destroy the Spirit, and sprints over to the light. Takuya grabs onto his tail and is pulled in with it. Cerberumon is burned by the Spirit's power, but Takuya remains unharmed. By instinct, he knows how to bring the Spirit to his D-Scanner. He evolves, for the first time, into Agnimon.

Takuya dodges Cerberumon's attack, and transports Neamon, Bokomon, and Tomoki to safety. Cerberumon uses Inferno Gate, and Agnimon quickly falls into one. He is clawed and attacked by Cerberumon, unable to see. He is angered, and uses his Burning Salamander attack to defeat him and later scans his DigiCode. Following the battle, he returns to his human self, and Takuya is left baffled by the events. 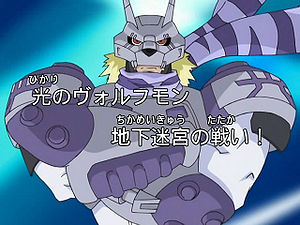