Ofanimon is one of the Three Archangels in Digimon Frontier. 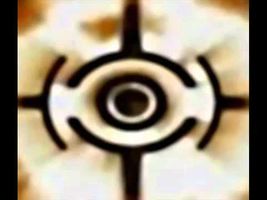 Ofanimon was one of the Three Archangels who ruled the Digital World after the defeat of Lucemon by the Warrior Ten. She was responsible for the Human Tribe along with Seraphimon, and was responsible for keeping the Legendary Spirits of Fire, Thunder, and Ice. During the anime events, she maintains contact with the Chosen Children through an eye-resembling symbol by the Digivice. 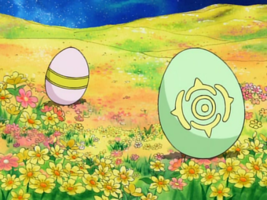 After Cherubimon become corrupted, Ofanimon was arrested by him in a prison of light in his castle. From prison, she was able to send messages to the children of the entire world in search of the Chosen ones who would inherit the power of the Legendary Spirits and save the Digital World, who would be Takuya and his friends.

After Ranamon, Arbormon, Grottemon, Mercuremon and Duskmon being defeated, Ofanimon calls the children to Cherubimon's castle. When they arrive, they try to release Ofanimon, but before it, they have their Digivices taken by Cherubimon. Before Cherubimon obtains Izumi's Digivice, Ofanimon forces the prison of light, releasing herself, saving Shutumon from a Cherubimon attack and being injured in the process. Ofanimon manages to deceive Cherubimon, purifying him for a few moments and taking back the Digivices. She sends the children to a safe place while Cherubimon slowly returns to his corrupted state, only to fight her when he discovers that Ofanimon took the Digivices. Ofanimon briefly fights with Cherubimon, but is defeated and killed by him. But the children discover that she modified their Digivices, making they capable to evolve more by combining the power of the Spirits.

Futurely, it's discovered that four children who Ofanimon called didn't return home after Takuya, Kouji, Izumi, Tomoki and Junpei were chosen: Katsuharu, Teppei, Chiaki and Tetsuo. They refused to return to the human world, so Ofanimon sent Angemon to take care of them while in the Digital World. Its also revealed that Ofanimon knew of Kouji's family situation when it induces him to find his Beast Spirit and when she saved him of being killed by Velgrmon.

Ofanimon reborn after the complete destruction of the Digital World reincarnated in Plotmon along with Cherubimon, who reborn as Lopmon.

In the game story, Ofanimon calls the Player to the Digital World while arrested by Cherubimon.