For the toy of the same name, see Digivice iC Toy.

The Digivice iC (デジヴァイスｉＣ Dejivaisu iC; Dub: Data Link Digivice)—referred to on-screen as just the Digivice (デジヴァイス Dejivaisu)—is a model of Digivice that is used by agents of DATS in Digimon Savers, and by Tamers in Digimon Next and some video games in the Digimon Story series.

The Digivice iC is a small, thin, rectangular model whose base is bent inward at an angle. It is controlled by a set of three buttons on its face, which are positioned along the circumference of a circular pad of the same color as the base of the device beneath the faceplate. On its back is an optical unit, and on its top is a pronged plate, through which its users may input Digisoul by contacting the plate with their hand. A rectangular ring is attached to its base, enabling it to be clipped to belts or lanyards for storage.

The Digivice iC is an invention of Professor Daimon Suguru's, which he developed during his ten years stranded in the Digital World.[11] He once described it as "a tool that connects the hearts of humans and Digimon" 「デジモンと人間の心を繋ぐ道具」, reflecting his vision of a world in which humans and Digimon could someday coexist.[12] He sent the blueprints for the Digivice to the Real World, together with emissaries Kudamon and Kamemon, and when the Digital Accident Tactics Squad was established in accordance with Professor Daimon's message to the Real World, its staff came to be issued Digivices for their operations with the agency.[11]

Professor Daimon also entrusted one Digivice iC to Mercurymon for him to someday give to Noguchi Ikuto, as he expected that the boy would one day have need of it.[12]

Professor Daimon's son, Daimon Masaru, receives his Digivice iC before he ever joins DATS, as it is given to him by Yushima Hiroshi during the Cockatrimon attack.[1] After this battle, Masaru inadvertently loses the Digivice at DATS headquarters after his meeting with Satsuma Rentarou; upon noticing the Digivice, Satsuma—who up to that point had been dismissive of Masaru—concludes that not only had it come from Yushima, but that if Yushima had seen fit to give it to him, then he must have seen some potential in the boy. This sways Satsuma into attempting to recruit Masaru into DATS, instead of wiping his memory.[4]

During the DATS team's infiltration of Mercurymon's palace in the Infinite Ice Ridge, Gottsumon forces Fujieda Yoshino and Thoma H. Norstein to drop their Digivices and surrender by threatening Yushima. Masaru later finds their Digivices while he and Ikuto are escaping the fissure that Gottsumon caused, and when he rejoins the group in Mercurymon's throne room, he returns the Digivices.[13]

When Director Hashiba orders the dismissal of DATS' core staff on charges of treason and the arrest of Ikuto, his agents take possession of Satsuma, Masaru, Thoma, Yoshino, Ikuto, Megumi Shirakawa and Miki Kurosaki's Digivice iCs, and keep them in a laboratory in DATS headquarters. Once the partner Digimon escape from their imprisonment in the building, they retrieve the Digivices to return to their partners. Miki, Megumi and Ikuto get theirs back immediately when their partner Digimon and Kudamon break them out of their cells in the building, while Agumon, Lalamon and Gaomon seek out Masaru, Yoshino and Thoma and, once they have succeeded in bringing back their erased memories, return their Digivices to them.[14]

During a battle with Kouki, Nanami and Ivan in the Digital World, Masaru, Thoma and Yoshino manifest an immensely powerful, uncontrolled Digisoul out of their need to save Jyureimon from the three Bio-Hybrids. While this powers up their partner Digimon enough to defeat the Bio-Hybrids, their Digivices are totally unable to handle the strain of what Tohma hypothesizes is the Ultimate-class power that they were projecting, and are broken beyond repair. Masaru's initial plan is to seek out Professor Daimon to repair them.[15] Instead, however, they meet Bancho Leomon, who trains them to control their Digisoul. Once they come to an understanding of his lessons and master that powerful Digisoul, at Bancho Leomon's direction, they input that Digisoul into their broken Digivice iCs, which take in their feelings and evolve into Digivice Bursts; Thoma speculates that all along, the Digivice iCs had been programmed to evolve in this manner along with their own control of their Digisoul.[16]

Eventually, when he acquires the ability to manifest his strongest Digisoul during his and Yoshino's fight against Duftmon, Ikuto's Digivice also evolves into a Digivice Burst, enabling him to Burst Evolve Ravmon into Ravmon: Burst Mode.[17] 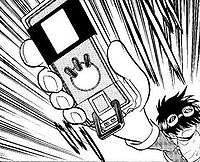 Tsurugi and his Digivice iC

The origins and nature of the Digivice iC are never explained at all in Digimon Next.

Tatsuno Tsurugi obtains his Digivice iC from Piccolomon, who transforms his original Digimon Mini into it.[18] When Tsurugi and Agumon visit Middle Town, Inui Yuu's Gaomon attempts to steal it in order to get food for Yuu. Tsurugi gets the Digivice back shortly after when they find Gaomon and Yuu, and he and Yuu recognize each other.[6]

Kahara Shou obtains his Digivice iC from Barbamon in order to fight Tsurugi.[8]

As his last gesture before his death, Andromon transforms Yuu's Digimon Mini into a Digivice iC.[19]

During their battles at the System World, Tsurugi's Digivice iC is destroyed when Zanbamon throws a dagger into it,[20] and Yuu's iC breaks for an unknown reason. Shou destroys his own Digivice in order to prove to Tsurugi that a Digivice is not needed to keep up the bonds between Tamer and Digimon.[21]

At the moment that Zanbamon and Chaosdramon corner them, Mikihara Norn sends two Digimon Twin Digivices from within the System World to Tsurugi and Yuu, to replace their broken Digivice iCs.[22]

The player character uses a Digivice iC. It appears in the background of the game's pause menu.

When a day on the player's Farm Islands is completed, the Digivice sounds an alarm to check if the player wishes to view the results.

As in the Digimon Savers anime, agents of DATS continue to use their Digivice iCs. Some of the game's new human cast members, including Katsura Kosaburou, Kagura Tsukasa, and Nitta Masaki, also own Digivice iCs.

The Digivice iCs can be seen in various cutscenes, including Digimon evolution sequences.

Sayo has a Digivice iC, evidently replacing the Digivice Burst that she previously owned in Digimon Story: Sunburst and Moonlight.

Sayo still has her Digivice iC.

The Digivice iC is the basis for the Digivice iC line of LCD virtual pets, produced for the Japanese market. Unlike previous Digivice toys, it is not a quest device. Similar to the Digimon Accel virtual pet line's DNA mechanic, the player inputs Digisoul through the sensor plate on the top of the device to influence the course of the Digimon's evolution.

This Digivice is also the basis for the separate Digivice Data Link line of LCD toys that was produced instead for the American, European, Asian, and Oceanian markets. Unlike the Japanese Digivice iC, gameplay in the Digivice Data Link blends elements from both virtual pets and Digivice-style quests.