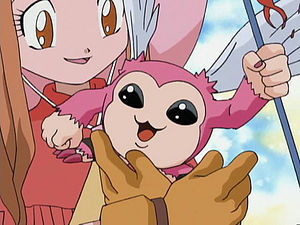 Piccolomon is the owner of the Holy DigiMemory, and the one responsible for bringing Tatsuno Tsurugi and Agumon into the Digital World.[46], having originally followed them in Net Battle after realizing Agumon (then Greymon) was an Illegal Digimon[47]. He accompanies them until they reach Hidden Valley, where he gets heavily wounded by Sealsdramon and has his DigiMemory stolen, forcing him to part ways with them, but not before turning Tsurugi's Digimon Mini into a Digivice iC.[48]

He later reappears after Chaosdramon ran away with Kitajima Ami and Pitchmon, raising Tsurugi and Inui Yuu's spirits and recovering their energy[49].

During the fight against N.E.O, he helps contain him alongside the other owners of the DigiMemories, alive or dead[50].

Piccolomon resides in the Tropical Jungle, though there's a very rare chance to see it, as its seen in the screen that has two Muchomon in the day or two Jungle Mojyamon in the night. Piccolomon has an usual routine, that it shows up at the same hour every day, but the hour is different in every game and save file. When Piccolomon is spotted and if your Digimon isn't strong enough to face it, because due to being a Perfect Digimon, it provides a hard battle, its reccomendable to take notes of the time it starts showing up.

After its spotted and defeated, it'll join the Village of Beginnings along with the Item Shop Digimon: Monochromon, Unimon, Patamon and Piyomon, where it'll rarely show up, and if it does, it'll sell you a Training Manual for 50,000 BITs, which raises the earned stats of your Digimon when training. If you don't see Piccolomon in the Shop, you can simply enter and leave until it appears.

Piccolomon's Digivolution item is the Small Spear which lets any Adult Digimon evolve into Piccolomon.

A Piccolomon NPC lives in the village that serves as the hub area of the game. It lives inside and hosts the Piccolo Battle Lesson, which allows Akiyama Ryo to play Test Battles with mixed, Land, Sky, or Sea Digimon.

Piccolomon is also an obtainable Variable Move. Its attack, Bit Bomb, raises one ally's SP by 2. It costs 16 V2.

Piccolomon appears in Steep Road's Battle Cafe after Infinity Tower's third Battle Arena is cleared. Upon talking to it, it tells the player that it's been a long time since they last saw each other (despite being the first time it appeared in the game), and asks him for a battle. Piccolomon plays the Return deck, a Green/Nature deck that uses Jamming and Counter Attacks. Upon being beaten for the first time, the player is awarded the Speed Sevens card.

Can be evolved from Unimon if above level 36, or can be found at Sky Palace. It also can evolve to Jijimon if above level 38 and Stress below 10%, or Babamon if level is over 38 but Stress above 90%. He also appears giving you Pudding Recipe at Mangrove Forest during Sunflowmon's request mission.