For the toy of the same name, see Vital Bracelet Digivice-V-.

Unlike other Digivices from past anime series, the Digivice-V- is directly based on a pre-existing real-world virtual pet: the Vital Bracelet Digital Monster. Following its design, it is a smartwatch with a simple, rectangular shape. On its left side is a port for accepting DiM Cards, which is usually covered by a rubber cap when not in use. On its right side are three buttons for controlling the device.

Also unlike the majority of Digivice models in other Digimon media, Digivice-V-s do not have any personalized shell colors for their user, as all of them are navy blue. However, their screens do display a unique background color for each user when displaying the clock or vitals gauge screen (e.g. when their partner Digimon is evolving). 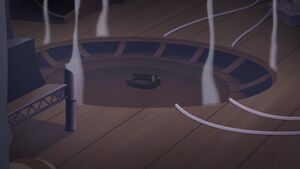 When Amanokawa Hokuto mysteriously disappears, all that his son, Amanokawa Hiro finds is a single Digivice-V-, with a DiM Card already inserted, in a smoking hole in the floor of Hokuto's study. Hiro does not reveal its existence to the police when they come to investigate Hokuto's disappearance.[9]

Six months later, Hiro is startled by the sudden sound of rummaging in his room and three DiM Cards falling on his head, and he finds a box with three Digivice-V-s in his closet.[N 1] He inserts a DiM card that projects a message from Hokuto, who gives him basic instructions on using the Digivice to fully materialize his new "little brother", Gammamon.[9]

When Hiro meets Tsukiyono Ruli and notices that Angoramon is invisibly following her, he gives her a Digivice-V- to use to materialize Angoramon.[12]

One day, Higashimitarai Kiyoshiro returns home to find a Digivice-V- (which he recognizes as the same device Hiro wears) apparently floating in mid-air, and a message scrawled in ketchup on his ceiling: "PUT THIS ON" 「これをつけろ」. Jellymon (still invisible to Kiyoshiro without putting the Digivice on) is responsible for both of these, having apparently stolen one of the Digivices from Hiro's room. She thrusts the Digivice into Kiyoshiro's face to convince him to put it on, then reaches out to insert the DiM Card to materialize herself.[13]

Eventually, Hokuto sends Hiro a package with three new DiM cards that he has developed with the assistance of some Digimon friends, which contain a program designed to boost the effect of the Digivices' sensors. Some time after all three have used the DiMs, during Hiro and Ruli's battle with Dark Knightmon, Gammamon's determination to keep fighting and protect the group triggers the evolution of all three Digivices into Digivice-VV-s.[1]

Vital Bracelet Digivice-V- is a model of the Vital Bracelet line that ties into Digimon Ghost Game. The objective is to raise a Digimon that evolves based on the user's heart rate and exercise routine. This model does not differ much from a regular Vital Bracelet Digital Monster, except for some minor changes to gameplay progression and DiM Card compatibility, and the unique logo on its shell.