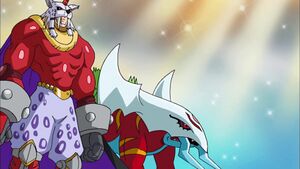 Marsmon was a member of the Bagra Army, serving under Apollomon in Bright Land. After the initial confrontation with Xros Heart, he guided them through Apollomon's tower. He was later executed by Whispered for his role in the attempted rebellion (which Apollomon had been secretly planning (or so he thought)) against Bagramon. He was revived during the final battle against Darkness Bagramon and became part of Shoutmon X7 Superior Mode.

Marsmon appears in a flashback of Mogami Ryouma.

Marsmon is the natural Ultimate form of the Bearmon line. It evolves from Bearmon at level 40, or from Grappu Leomon at level 99 if not a Bearmon. It can evolve to Devimon at level 10, Growmon at level 20 with 480 Strength, and Stingmon at level 30 with 400 Speed. Its finishing technique is Mugenhadou, a physical move which it learns at level 85.

Marsmon is an available Burst Mode Evolution for Bancho Leomon.
It can be unlocked if level 70 or above with the item Tria Knuckle.

Marsmon can only be obtained as a collectible card.

Marsmon helds a tournament at the Colosseum that will test the potential of Aegiomon.

Marsmon is available as a Digimon Medal.

Marsmon is available as a Digimon Medal.