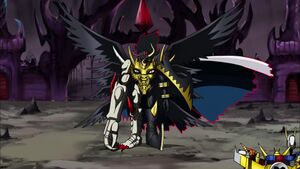 After Xros Heart neared victory over Dark Knightmon (Bagramon), Bagramon's mind attacked his brother's, and took control of the DigiXros, transforming it into Darkness Bagramon. In this form, he traveled to Earth and began his attack, but was deleted by Shoutmon X7 Superior Mode.

Darkness Bagramon is a boss Digimon in the arcade game's sixth season[12].