A Koemon is part of a village formed by Digimon whose own villages were destroyed by Zanbamon before "The Gold Wolf of the Crescent Moon". 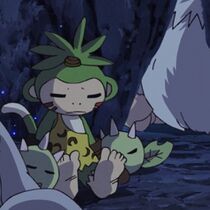 Koemon appears in "Zashiki-Warashi". At a beach resort, at night, a temari would mysteriously be thrown from the shadows at anyone nearby, a mysterious voice would invite the person in question to "play", and all victims would end up with marks on their bodies, in addition to being kept awake all night. It is revealed that the resort's "Zashiki-Warashi" was actually Koemon. He claims to have appeared in that place some time ago, but no one saw him, except for an old lady he called "Grandma". "Grandma" took him to play with the temari and watch fireworks, but one day she disappeared, and Koemon started looking for her using the temari to get the attention of any humans staying at the resort. Ruli discovers a letter left by "Grandma" saying that she would need to go stay with her son, explaining why she disappeared. Then, Betel Gammamon and Jellymon create explosions similar to fireworks to cheer Koemon, and he materialize and decides to travel the human world.

In "Asunaro Meat" Koemon, carried by two Pico Devimon, met with Orgemon and told them that the Asunaro Meat had been completed.

Koemon is an obtainable digimon. It can be obtained either by choosing the Powerful Pack at the beginning of the game, or by speaking to DRI Agent Yang at the Mobius Desert and obtaining the data from Assaultmon, who can be found at Duelist Island in Asuka Server.

Appears as an NPC Digimon during Impmon's Onegai Quest. Gives you the Slingshot which Impmon wanted. It is not obtainable and cannot be evolved from any Digimon.

Appears at the Coliseum Access Counter. It is not obtainable and cannot be evolved from any Digimon.

Koemon is available as a Digimon Medal.