The Botamon that hatched from the Digitama evolves to Koromon after being fed and befriends Yagami Hikari and Yagami Taichi.

Koromon is the partner Digimon of Yagami Taichi. Additionally, a Koromon Village was the first place visited by the Chosen Children upon arrival at the Server Continent, and by the year 2028 Taichi's son has also partnered with a Koromon.

One Koromon is seen on the Akiba Market.

Koromon is the partner Digimon of Yagami Taichi.

Koromon is the partner Digimon of Yagami Taichi.

Koromon is the partner Digimon of Yagami Taichi. While Taichi first meets him in this form, he quickly evolves into Agumon, and stays in that form afterwards.

The Botamon that Taichi saved in "The Crest of Courage", during Valkyrimon's test, evolved into Koromon after Taichi tried to save him from a group of Allomon, though it quickly evolved further into Agumon and Greymon. After the battle, it returned to its previous forms, grabbing Taichi's head as Koromon as a reference to the Digimon Adventure movie.

In VITAL BRACELET Lab, an overlay with Koromon's data appears in the eponymous Vital Bracelet Lab, alongside many other data overlays, in front of Palmon and its Tamer. Another overlay shows Koromon as part of the Agumon Dim Card's evolution line. A third Koromon overlay hides the OPEN THE GATE? overlay that triggers Black War Greymon's Raid Boss Battle alongside an Ulforce V-dramon overlay.

Koromon is the partner of Tatsuno Tsurugi.

A Koromon is pictured on a billboard along with several Botamon.

Two Koromon are amongst the Digimon that celebrated the destruction of the polyhedron, one of which climbed onto Yagami Taichi's arms. 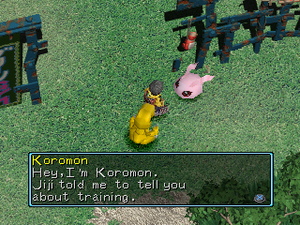 Koromon introducing to the Player.

Koromon is an obtainable Digimon in Digimon World and evolves from Botamon after 6 in-game hours have passed, with no necessary conditions required.

A Koromon appears as a NPC found in the Green Gym's entrance, explaining the Player on how to use the Gym facilities, used to raise the 6 main Stats of the Digimon.

Koromon evolves after 24 in-game hours have passed and has 3 different evolution choices that can be achieved by clearing these condition requirements:

Evolves from Botamon. Can evolve to Agumon or Betamon.

Koromon is an obtainable Baby II Level, None Attribute, Land Type Digimon. It can be found in Mountain Cave.

May evolve to Agumon at level 11 or Tyranomon by Card Evolution.

Koromon is a playable Digimon partner. Evolves from Botamon and can evolves to Agumon.

Can be chosen as one of the three partner Digimon from the beginning of the game. If chosen as your partner, he can be found wild in Data Forest.

Koromon is a Baby-level, Balance-class, Dragon-species Digimon with a resistance to the Fire element and a weakness to the Earth element. Its basic stats are 66 HP, 67 MP, 47 Attack, 35 Defense, 27 Spirit, 28 Speed, and 11 Aptitude. It possesses the Powerful 1 trait.

It dwells in the Limit Valley.

Koromon can evolve into Agumon or Dot Agumon. In order to degenerate into Koromon, your Digimon must be at level 3 or higher.

It can be hatched from a Red Digitama.

Koromon leads the team "Immortal Brave", made from the refined data of rivals, heroes, dreams, and legends that have appeared and disappeared from the Digital World, all the way from the past up to the present. They eventually face Kudou Taiki and the Xros Heart during the Legend Tamer battle at the DigiColosseum. It is said to be the one that made Digimon to be known by humans in the first place, that appeared once as a small fluffy black Digimon and grew up until it became a gigant.

Koromon is an obtainable Digimon which is evolved from Botamon, and can evolve to Agumon, Candmon, Gabumon, Kamemon, or Pico Devimon. It can also be obtained as a collectible card.

Koromon is the partner Digimon of Yagami Taichi. As in the anime, he first appears in this form in Episode 1, "Adrift? Island of Adventure!", then evolves into Agumon before fighting Kuwagamon and stays in that form as his base. Koromon is not playable, as no Digimon can be fought before Kuwagamon.

Another Koromon evolved from a Botamon Takaishi Takeru and Patamon hatched from a Digitama in the Village of Beginnings in Episode 17, "Adventure! Patamon and I". Upon evolving, it was congratulated for it.

The Chosen Children returned to the Koromon Village, which was in a state of disrepair due to Etemon's attack, in Sub-Episode 10, "Revisiting the Koromon Village", as Sora believed that it'd help them find a way for Taichi's Koromon to evolve back into Agumon, as he had lost the form after Dark Evolving into Skull Greymon. Since the Crest of Courage and a transport device were there, Izumi Koshiro believed it was possible and Tentomon thought a legend about evolution probably existed in the village too. However, talking to the Koromon made it clear said legends did not exist, with one pointing out that if they did, they would've used it themselves. However, a legend about invigoration medicine (as well as many other medicines according to one Koromon) that would give a sick drinker great power did exist, and the village Koromon could make the medicine with DigiPinecones, which grew on the farthest tree from the village. The Chosen Children decided to get them for Koromon's sake.

While they had to fight a Gazimon for the DigiPinecones, the Chosen Children were able to bring them back to the Koromon Village, and the Koromon made the invigoration medicine from them. Taichi and his Koromon then drank the medicine, which they found gross. Nonetheless, it did invigorate them – with anger, which made Koshiro wonder if it was meant to work like shock therapy. To make up for it, the Koromon gave Taichi and Koromon the Gamble Attack DigiPiece, which allows the equipped Digimon to use the command of the same name for an attack with a low hit rate but a guaranteed critical hit.

In Episode 34, "Mammon, the Great Clash at Hikarigaoka!", Taichi remembered the events of what was thought to be a terrorist attack in Hikarigaoka four years ago, when he and Yagami Hikari watched a Koromon, who was now a gigantic Greymon, fighting a Parrotmon, and how Greymon was beaten by Parrotmon, but Taichi got him back to his senses using Hikari's whistle. Taichi then remembered the rest of that day, how a Koromon appeared at their house, and that Koromon evolved into Agumon and Greymon and fought Parrotmon, then they both disappeared. Taichi's own Koromon thought that had to be a different Koromon, though he felt nostalgic when he met Taichi for the first time.

When you find the first part of your avatar in Chapter 1 you encounter two Koromon.

Evolves from Botamon. Can evolve to Agumon or Betamon.

Koromon is a partner Digimon. Can evolve to Agumon.

Evolves from Botamon. Can evolve to Agumon, Gabumon or Betamon.

Evolves from Botamon after 10 minutes of hatching. Can evolve to Agumon with 0-2 care mistakes or Betamon with 3 or more after 12 hours of birth. It can also evolve into Taichi´s Agumon if it comes from a Special Agumon egg. Sleeps at 21:00 pm.